The Cubs are unlikely to trade Alfonso Soriano or Carlos Marmol prior to Opening Day.

There have been several trade rumors involving Chicago Cubs outfielder Alfonso Soriano and closer Carlos Marmol circulating throughout the offseason. However, Bruce Levine of ESPN Chicago doesn't think either Soriano or Marmol will be traded prior to the start of the regular season.

Levine attributes the Cubs' potential retention of Soriano and Marmol to the fact that their rotation and lineup has been "fairly decimated." Chicago is dealing with health concerns involving starters Matt Garza and Scott Baker, while third baseman Ian Stewart is slated to begin the season on the disabled list.

Despite being 37 years old, Levine notes that Soriano is still an important run producer for the Cubs. Levine also believes Chicago will be hesitant to trade a reliever when the bullpen is expected to be counted on considerably early on given the team's current rotation situation. 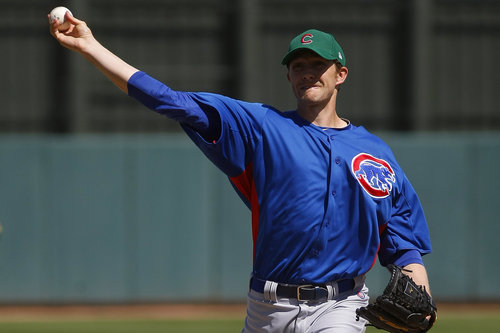 Chicago has shut down Scott Baker due to elbow inflammation.

Soriano has been tied to several teams this offseason -- including the New York Yankees. He hit .262/.322/.499 with 33 doubles and 32 home runs last season, but his trade value is diminished by the fact that he's owed $36 million over the next two years.

Marmol -- whose erratic pitching continued last year -- has been most frequently tied to the Detroit Tigers this spring. Despite maintaining a 3.42 ERA and compiling 20 saves, the right-hander allowed 7.3 walks per nine innings in 2012.