Roy Oswalt is looking to pitch for a contending team this year. He's been working out in hopes of impressing scouts enough to sign him.

Remember last year's Roy Oswalt experiment? Wait until mid-season, sign him, give him some minor league time, bring him up, and he'll help down the stretch. It was a good plan on paper, but like most things that look good paper, it didn't quite work. Now, Oswalt is looking to put himself in the exact same position, and it will probably go down just like it did last year.

Tim Dierkes of MLB Trade Rumors says Oswalt's agent told the site that the veteran righty has been working out at Mississippi State University. He is intent on pitching for a contender rather than staying close to home like he did last year (sorry for your luck there Rangers). Oswalt has even indicated he'd be willing to pitch in relief. 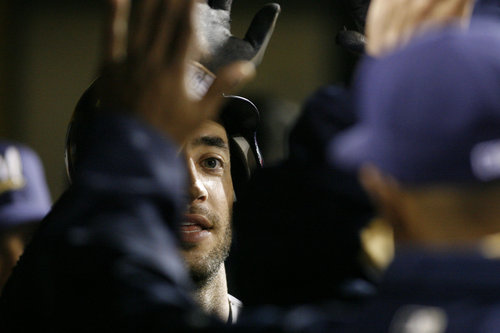 We're learning more about the connections to Biogenesis and the reach of the clinic's operation.

Oswalt fell apart last season when he was called up to pitch for the Rangers. He started in Double-A and Triple-A to prepare him for pitching in the big leagues again after his half-season layoff. Oswalt ended up appearing in 17 games for the Rangers, and only nine of those were starts. He posted a 4-3 record and a 5.80 ERA. It was the highest ERA of his career.

After struggling mightily as a starter (Oswalt went 3-3 with a 6.36 ERA), he was demoted to the bullpen. Oswalt fared better in the pen, going 1-0 with a 3.65 ERA. The Rangers did not get nearly what they thought they would out of Oswalt last season. In fact, he account for -0.3 bWAR while making $5 million. It was far and away the worst season of the 35-year old's career.

Now, he is looking to prove that was an anomaly. He is looking to prove that he's healthy enough to compete and put his failures behind him. And maybe he is. In his career, Oswalt is 163-96 with a 3.28 ERA. He has been dominant at times in his career. If he can recapture some of that dominance, some team may get him at a bargain price. However, there is always the risk that he will flame out exactly like he did with Texas last year.