Carlos Quentin, the driving force (along with Chase Headley) to the Padres' impressive second half last season, is feeling more like he'll be ready for Opening Day than not. That's good, right?

Last season, the San Diego Padres were forced to go to work without their newly acquired left fielder at the start of the season. Carlos Quentin suffered a knee injury that required surgery and kept him out until May. When he returned, the Padres were a different team (in a good way!). Unfortunately, the knee didn't hold up and Quentin had offseason knee surgery again. This year, though, San Diego may not have to start the season without him.

According to Bill Center of the San Diego Union Tribune, Carlos Quentin is feeling better about his knee. He said he was feeling like he was on pace to be ready for Opening Day. This came after Quentin played in his third-straight minor league game. He is on track to start a Major League game soon. 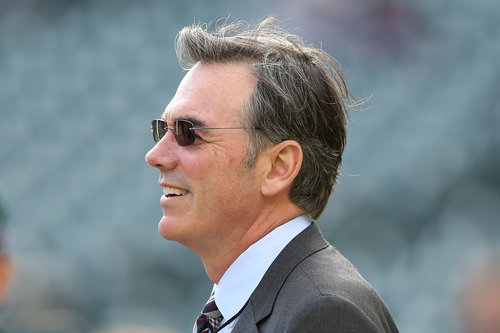 A swap of minor leaguers between the Brewers and A's.

"I still believe I have that opportunity to be ready," Quentin said about his availability for the April 1 season opener against the Mets in New York.

If he was ready, the Padres could get a jump start on what they hope is carry-over from last year's success. Part of the reason behind their limited offseason moves is budgetary, and part of it is the belief that last year's second-half success was no fluke. However, in order for the team to test that hypothesis, Quentin will need to be healthy and on the field.

Quentin was acquired by the Padres in December of 2011 via trade. San Diego send Simon Castro and Pedro Hernandez to the White Sox in exchange for the then-28-year old outfielder. Quentin only managed to play in 86 games when it was all said and done last year, but the Padres didn't even need to see that. They signed him to a three-year extension in June.

The Padres were rewarded for their faith. Quentin hit .261/.374/.504 with 16 home runs. He posted the second highest OPS+ of his career at 145. He certainly got San Diego drooling and dreaming about what it would be like to have Quentin healthy for a full season. However, that might be all that is. A dream.

In his career, Quentin has always been a good hitter. He has hit .253/.349/.492, but he's been injury-prone. Quentin has never played more than 131 games in a season. San Diego is hoping that changes, but considering his knee problems it's unlikely. They'll probably settle for him being ready for Opening Day.