The Chicago left-hander has had a very rough spring, which indicates that he may not be completely healed from his August shoulder surgery.

White Sox left-hander John Danks got roughed up on Wednesday for the fourth consecutive start -- surrendering 10 runs on 11 hits in 3⅓ innings against the Reds -- leaving "little reason to believe" the southpaw will be on the roster come Opening Day, reports AJ Cassavell of MLB.com. 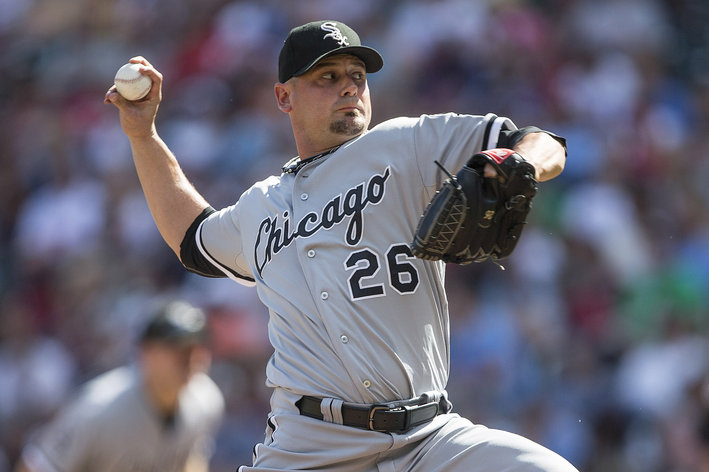 The righty reliever is hoping to be good to go come Opening Day.

Danks, soon to be 28, underwent surgery in August to repair his shoulder capsule and rotator cuff. The left-hander says that he feels fine physically -- and that he's "making strides" -- but his numbers in camp seem to indicate otherwise. Danks now has a 16.36 ERA and just four strikeouts in 11 innings this spring -- good for a .443 batting average against -- and Cassavell reports that his velocity has not returned to its pre-surgery norms.

While Spring Training numbers by themselves are typically taken with a large bucket of salt, the fact that Danks velocity isn't there may be indication of a real problem. Manager Robin Ventura hasn't ruled Danks out of a roster spot entirely, noting that the Sox don't actually need a fifth starter until April 13, but he did note that the left-hander's "window is closing."

Now entering his seventh season with the White Sox, Danks owns a 4.12 ERA and 6.9 K/9 rate in 159 starts for Chicago. Signed to a five-year, $65 million contract extension following the 2011 season, Danks will make $14.25 million each of the next four years.