The New York Yankees could sign free agent Kyle Lohse, but general manager Brian Cashman "wants no part" of the right-hander, according to Ken Rosenthal of FOX Sports.

Cashman told reporters that he doesn't believe it would "make any sense whatsoever" for the Yankees to sign Lohse. The GM indicated that the rotation isn't the team's problem, but instead "pitching is our strength."

Rosenthal doens't necessarily disagree, but he does go on to make the case for New York signing Lohse. In his scenario, the Yankees would sign the free agent and then trade one of Ivan Nova or David Phelps for "the offense they so desperately need." 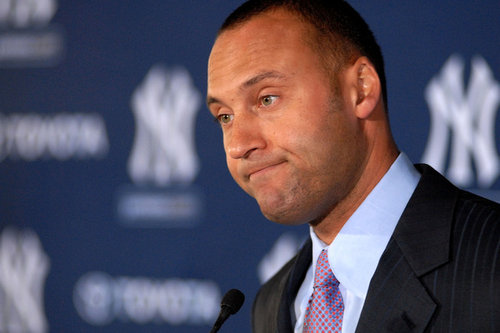 Derek Jeter's ankle inflammation could sideline him for the start of the regular season.

New York has six starters in camp -- Nova, Hughes, CC Sabathia, Andy Pettitte, Hiroki Kuroda and Phil Hughes -- while Michael Pineda is expected to return from injury at some point this season. Lohse could be a solution, but Rosenthal says a signing would require two "leaps of faith."

First of all, New York would have to view the 34-year-old as "better than an overpriced No. 4 starter" in the AL. Beyond that, the Yankees would also have to be sure that Nova or Phelps could help them acquire a quality hitter.

Rosenthal understands why the Yankees would be hesitant to make such a leap, but he believes New York will have to get creative to solve their current issues. The club is set to enter the season with several regular position players sidelined due to injuries -- including Mark Teixeira, Curtis Granderson and Alex Rodriguez.