Cincinnati's experiment with Chapman in the rotation is over before it could ever really begin.

Share All sharing options for: Reds rumors: Aroldis Chapman moving back to bullpen

Well, so much for the Great Aroldis Chapman Experiment. The Cincinnati Reds have decided to move the Cuban Missile back to the 'pen as their closer, ending the offseason and early-spring trial run of Chapman in the starting rotation, reports Paul Daugherty of the Cincinnati Enquirer. 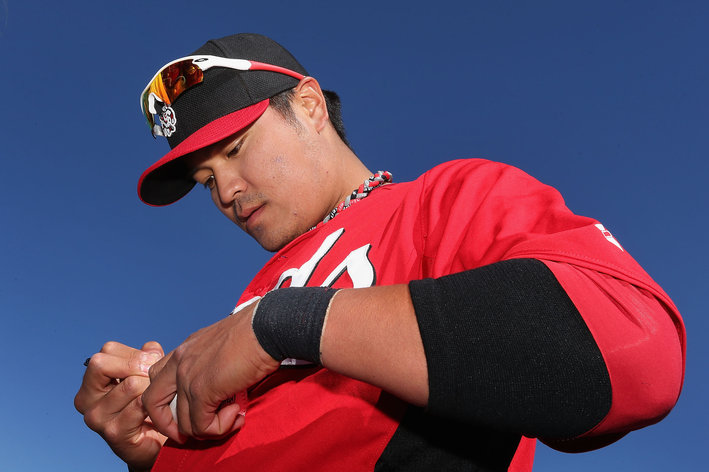 Back spasms continue to get the better of Cincinnati's new center fielder.

Chapman, 25, absolutely dominated in the closer role last year -- posting an otherworldly 1.51 ERA and 15.3 K/9 rate in 71⅔ -- and the Reds thought he showed enough stuff to possibly make a transition into the rotation. And when the club inked veteran reliever Jonathan Broxton to a three-year, $21 million deal in late November, it appeared that Cincinnati was doubling down on Chapman as starter.

So what happened then?

Perhaps there was a fear that Chapman would become the next Neftali Feliz or Daniel Bard? Or maybe the club just listened to the young left-hander, who said last week that he would prefer to work out of the bullpen. Per Hal McCoy of the Dayton Daily News, the decision ultimately came down to what everyone thought was best for the Reds:

Manager Dusty Baker, Chapman and most of the Cincinnati players said they’d like to see Chapman remain in the bullpen for the betterment of the team.

And that’s what pitching coach Bryan Price said all along, "That it would come down to what’s best for the team."

Keeping Chapman as closer is certainly best for the team.

With Chapman moving back into his ninth-inning role, Broxton will be bumped to eighth-inning duty, where he will likely share the setup role with southpaw Sean Marshall. The move also gives a rotation spot back to young right-hander Mike Leake, who was the odd man out with Chapman in a starting role.