The veteran shortstop made his retirement official on Thursday.

Share All sharing options for: Edgar Renteria retires from baseball

Edgar Renteria hasn't played in a big-league game since September 2011, but he didn't make his retirement from baseball official until Thursday. The veteran shortstop made a brief announcement on a local television station in Colombia, telling viewers that his baseball career is at an end, reports Andrew Simon of MLB.com:

"I always wanted Colombia to know before the rest of the world. This is my official retirement," Renteria told RCN Television, in comments translated by CBSSports.com.

"I feel proud, I feel satisfied with what I did, my heart is telling me that's enough and it's time to retire. You have to know when to retire and that's why I took a year and a half to rest and think about what I was going to do. This is the right time."

Renteria, 36, had a long and productive 16-year MLB career -- hitting .286/.343/.389 with 140 home runs for seven different clubs -- and had the fortune of bookending his time in the big leagues with World Series titles. 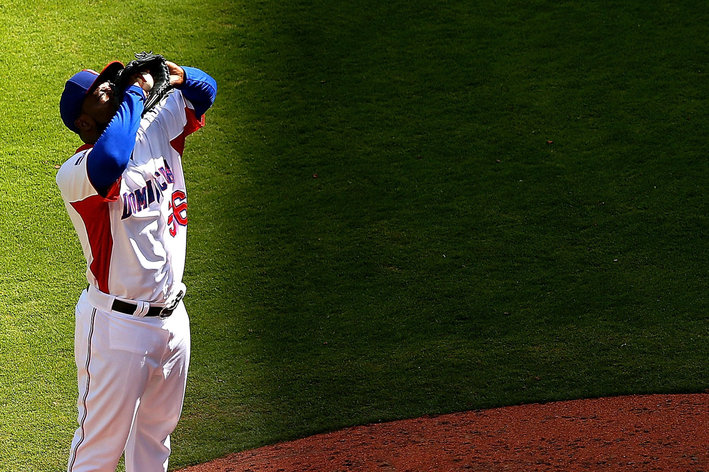 Fernando Rodney used a magical fruit to help him through the WBC. Can't make this stuff up.

The Colombian shortstop first made a name for himself in 1996 at the age of 19, when he was the runner-up for the NL Rookie of the Year award. Renteria suffered a bit of a sophomore slump in '97, but fans have forgotten the disappointing regular season in favor of remembering the legend of his World Series-winning single against the Indians in Game 7.

Renteria wasn't part of the Marlins' initial fire sale following the World Series victory, but did move on to St. Louis after just one more year in Florida. Once in St. Louis, Renteria started displaying a power stroke that wasn't present in Miami, earning him three Silver Slugger awards and two top-20 finishes in MVP voting.

After six seasons with the Cardinals, Renteria bounced around a bit more frequently, spending time with the Red Sox, Braves, Tigers, Giants, and finally the Reds. Making his second World Series appearance in 2010 with the Giants, Renteria again came up huge, batting .412/.444/.765 with two home runs in the series and taking home MVP honors.