Atlanta rumors: Brian McCann could be out until May

The Atlanta Braves may be without their All-Star catcher for longer than expected. The team does not expect Brian McCann to even play in a minor league rehab game until April 16th.

Share All sharing options for: Atlanta rumors: Brian McCann could be out until May

If Brian McCann is going to join the Atlanta Braves in April, he will have limited time to prove he's ready. The All-Star catcher is recovering from offseason shoulder surgery and will miss the first part of the season. The question is exactly how much time will he miss? Based on Braves' GM Frank Wren's estimation, McCann could be out through April.

Talking Chop: Around the NL East

According to Mark Bowman of MLB.com, Frank Wren has confirmed the earliest McCann will even get into a minor league rehab game is April 16th. If that's the case, it's unlikely McCann will be able to progress enough to play much (if at all) in April for the Major League club. Generally, players rehabbing from injury will play a few games at various levels in the minor league system. The process can take as little as a few days or as much as a few weeks. In McCann's case, it seems it will likely take a few weeks once he actually gets back on the field for rehab games. 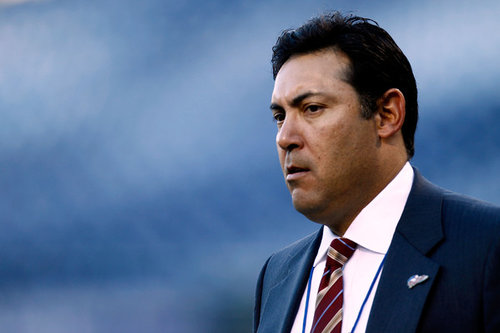 The Phillies may not be done adding players, but who can they still go after?

Brian McCann has been one of the best players on the Braves' roster outside of Chipper Jones. With Jones now retired, McCann is the face of the franchise - for now. The Braves have reloaded and are full of talented players who could easily steal that title away from McCann. Players like Justin Upton, B.J. Upton, and Jason Heyward all have "face of the franchise" potential. But McCann was considered one of the best at his position for a long time.

From 2006-2011, McCann did not miss an All-Star Game. In his eight years in the Majors - all with the Braves - McCann has hit .279/.351/.475. He struggled due to injury last season and only hit .230, but the Braves and McCann hope his offseason surgery will allow him to bounce back and hit like his old self. Of course, there's no guarantee that will happen, so the Braves have yet to extend his contract. McCann is scheduled to hit free agency after this season.

When he returns from rehab, McCann will quickly have to establish himself and prove he's healthy if the Braves are going to give him a new contract. Otherwise, the club will likely look elsewhere to fill the catcher position. McCann is scheduled to make $12 million this season, so it will be interesting to see if the club makes him a qualifying offer next offseason.