The Seattle Mariners received a scare when their young DH/catcher was hit in the head by a back swing and had to leave the game.

Jesus Montero was hit in the head on Francisco Lindor's backswing this afternoon. The impact sent Montero to the ground where he stayed for quite some time. Montero eventually have to taken out of the game. Montero had to be carted off to the clubhouse for evaluation.

Geoff Baker of the Seattle Times said Montero looked "pretty woozy" after eventually getting to his feet. There has been no immediate diagnosis, but it was a frightening moment for the Mariners and for Montero. If he has to miss any significant amount of time, it can can throw a wrench in the Mariners' rebuilding efforts. 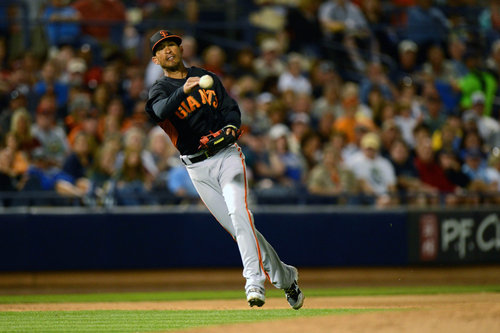 Wilson Valdez has signed a minor league contract with the Marlins…which means he'll likely be starting in the infield for the fish.

Montero is a big part of the club's youth and rebuilding movement. Seattle traded for Montero last January. They acquired him from the New York Yankees for Michael Pineda and Jose Campos. So far, the deal has worked out better for the Mariners as Pineda has battled constant shoulder issues.

Jesus Montero has not quite lived up to expectations yet, but he is still just 23 years old and still getting familiar with the Major League level. Last season was Montero's first full year in the bigs, and he hit .260/.298/.386. In his first year (he only played 18 games), Montero impressed the Yankees and scouts across the league by hitting .328/.406/.590. The Mariners are hoping he can replicate some of that production this season.

As it stands now, we don't know the extent of Montero's injury, but a concussion is a likely diagnosis. We'll keep you updated as we know more.