Kyle Lohse remains unsigned, but he is still hoping to earn more than the qualified offer he rejected on his way to free agency.

Free agent pitcher Kyle Lohse has had a difficult time finding work this off-season after he rejected the Cardinals qualifying offer, but the 34 year old righty is still seeking at least $14-$15M, according to Buster Olney of ESPN.

Lohse has become the poster child for the dangers of the new free agent compensation system this off-season. The Scott Boras client was tendered the qualifying, one-year offer that teams must now make in order to receive draft compensation, but he chose to seek a multi-year deal on the free agent market. After pitching 211 innings in 2012 with a 2.86 ERA, the fifth best mark in the National League, Lohse entered the off-season as one of the top pitchers on the market, behind Zack Greinke and Anibal Sanchez. However, the additional draft pick cost has had a huge impact on the market for his services and few multi-year offers have been reported over the off-season. He is now expected to take a one year deal and test the free agent market again next year (a standard Scott Boras practice), but $14-$15M, he is still finding few teams willing to meet his price.

Other free agents who carried the cost of draft pick compensation this off-season had struggled to find homes as well. Michael Bourn signed a 4 year/$48M deal with the Indians in February after many of the other top suitors for his services balked at the loss of their first round pick. Adam LaRoche, who rejected a qualifying offer from the Nationals prior to resigning with them, spoke out strongly against the compensation system this off-season. 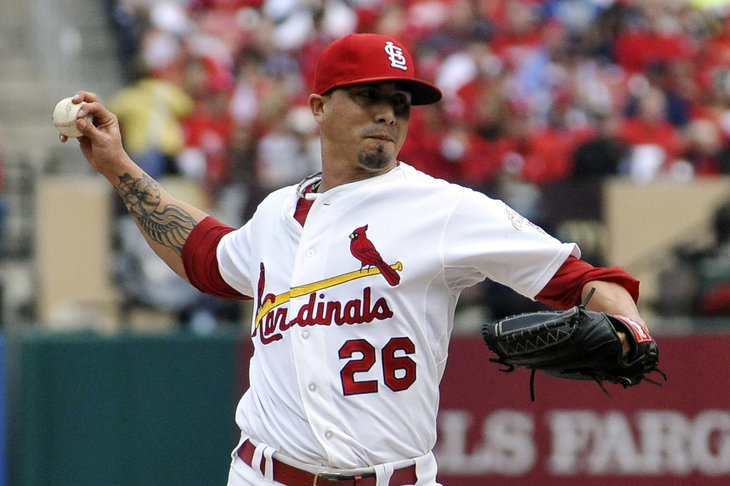 Lohse is certainly the top pitcher still available on the free agent market at this point, but teams are still balking at this price. In addition to the compensation issue, there may be some doubt about his ability to succeed away from . Since joining the Cardinals in 2008, Lohse has pitched 809 innings with a 3.90 ERA, which has been just slightly better than league average. Prior to joining the Cardinals, however, he had pitched six seasons in the American League with the Twins and posted a 4.88 ERA and struggled in and as well.

Several competitors are still looking for pitching as spring training draws to a close. The Angels, Royals and Reds have been connected to the pitcher recently and the Rangers and are both in need of more starting pitching. Lohse may need to settle for something closer to the $13.3M deal he originally rejected, but he will almost certainly pitch in 2013.