Cubs rumors: Scott Baker to miss first half of 2013

The Chicago Cubs suffered a blow when Scott Baker started having elbow trouble this spring. Now, he's been diagnosed with a muscle strain and is unlikely to return until July.

Share All sharing options for: Cubs rumors: Scott Baker to miss first half of 2013

UPDATE: It turns out Scott Baker's elbow setback is going to sideline him much longer than first reported.

Though the right-hander is expected to try throwing after a month, it's likely he won't take the mound for Cubs until after the All-Star break, reports Gordon Wittenmyer of the Chicago Sun-Times. And that's if everything goes well.

If Baker is cleared to throw after resting his surgically-repaired elbow for a month, the actual rehab program will take at least another two months from that point.

ORIGINAL: Scott Baker was going to be the safety net the Chicago Cubs needed for Matt Garza's potential disabled list appearance at the start of the season. Now, the Cubs are operating without a net. Baker, who had been feeling soreness and discomfort in his elbow, has been diagnosed with an elbow strain. Paul Sullivan of the Chicago Tribune says Baker will not throw for a month, then he will be reevaluated.

Bleed Cubbie Blue: Keep up with the Cubs with Cub Tracks

The Cubs will now likely be without Baker and Garza to start the season. Baker is coming off Tommy John surgery. The Cubs thought he would be a nice fit in the starting rotation and figured his recovery was progressing well-enough. They signed him to a one-year, $5.5 million deal this offseason. Now, with Baker's ongoing elbow concerns his ability to hold up through the season is in question. 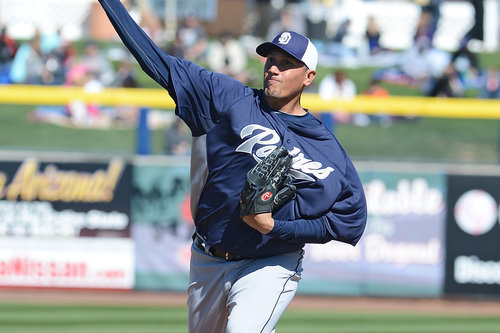 After a rocky spring, the Padres have released veteran righty Freddy Garcia.

Baker is a seven-year veteran in the Majors. He has spent every one of his Major League seasons with the Minnesota Twins until this year. The Twins granted him free agency last October. The Cubs scooped Baker up just two weeks later. In his career, Baker has been solid. He has not been great, but he's helped the Twins enough over his time there to have earned his contract with the Cubs.

If Baker's elbow was injured more severely than a strain (which has not been reported), the Cubs could be in big trouble. $5.5 million is quite the chunk of change to pay a guy who can't pitch. Hopefully, when Baker is reevaluated in a month, things will have healed up enough for him to make some minor league starts and rejoin the Cubs.