The Minnesota Twins are not among the teams that are watching free agent Kyle Lohse throw simulated games.

The Minnesota Twins are not among the teams that are watching free agent Kyle Lohse throw simulated games in Arizona, according to Darren Wolfson of 1500 ESPN.

While he still hasn't signed his next contract, Lohse continues working out in preparation for the 2013 season. He's throwing 90-pitch simulated games in Arizona to extend his arm. His workouts have some projecting that he won't require much time in spring training or the minors before he's ready to pitch in the bigs. 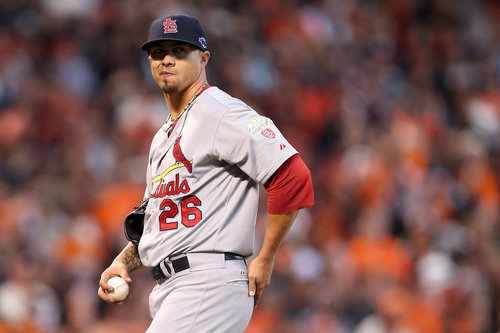 The Twins find themselves set to enter the 2013 season without their projected Opening Day starter -- Scott Diamond -- who continues to recover from offseason surgery. The Twins have acquired several arms over the winter -- including Vance Worley, Mike Pelfrey and Kevin Correia -- but considering Diamond's injury they could be in the market for an additional starter.

It's unlikely Lohse is that starter, as the right-hander is still reportedly seeking an average annual salary of $14-15 million. He was initially said to be looking for a "big" three-year contract, but he could possibly be had for a two-year commitment considering Opening Day is less than a week away.