Toronto has awarded their newly-minted No. 5 starter with a one-year extension.

The Toronto Blue Jays have come to terms on a one-year, $5.2 million extension with No. 5 starter J.A. Happ, reports Gregor Chisholm of MLB.com. 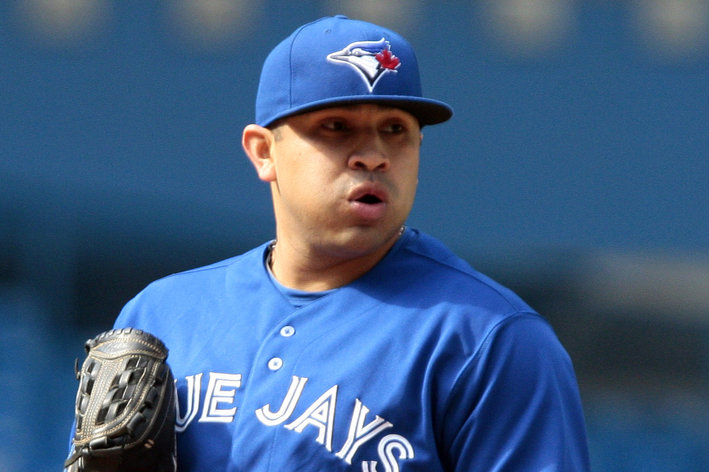 The Jays have demoted their 2011 & 2012 Opening Day starter with the hopes that he solve his control issues in the minors.

The deal buys out Happ's final year of arbitration and gives the Blue Jays the option of retaining him through 2015 for an additional $6.7 million. The southpaw's $3.7 million salary for 2013 will remain the same.

Happ, 30, came to Toronto last July along with Brandon Lyon in a nine-player deal with the Houston Astros. The tall left-hander's numbers in his half season with the Jays were not great, and the offseason acquisitions of R.A. Dickey, Mark Buehrle, and Josh Johnson left Happ's future with the organization in question.

Happ himself noted a few weeks ago that he was frustrated at being the "odd man out", and didn't like the idea of beginning the season in the bullpen or being sent to the minors. With Ricky Romero's surprise demotion to the minors earlier this week, however, Happ now has a relatively secure spot in the Jays' rotation and some new money to go along with it.

Even when/if Romero does return to the big-league club, Happ will likely be much more understanding of a stint in the bullpen knowing that he has $5.2 million coming his way the following season.

While Happ's earned-run average hasn't been great the last two seasons, his strikeout rate has been steadily on the rise, which could mean that better numbers are on the way. The southpaw owns a career 4.19 ERA and 7.6 K/9 in 590 innings over parts of six seasons.