Boston has two days to decide whether to grant the outfielder's request.

Boston Red Sox outfielder Ryan Sweeney has requested his release from the organization after being informed that he would not be a part of the Opening Day roster, reports Pete Abraham of the Boston Globe.

Abraham adds that he Sox have two days to decide whether to grant his request.

Sweeney, 28, joined the Red Sox last winter as part of the Andrew Bailey/Josh Reddick deal. The lefty slugger was one of the club's many outfielders to spend significant time on the disabled list in 2012, missing 84 games with finger, toe, and head injuries.

His persistant injury woes led to not-great numbers overall, with Sweeney batting just .260/.303/.373 in 219 plate appearances. Boston non-tendered Sweeney following the 2012 season but re-signed him to a minor-league deal in late January.

He seemed to be slated for a roster spot when Ryan Kalish went down with another major injury, but the signing of Mike Carp -- who has made the team -- and the emergence of young outfielder Jackie Bradley this spring -- who might make the team -- seems to have made Sweeney expendable. 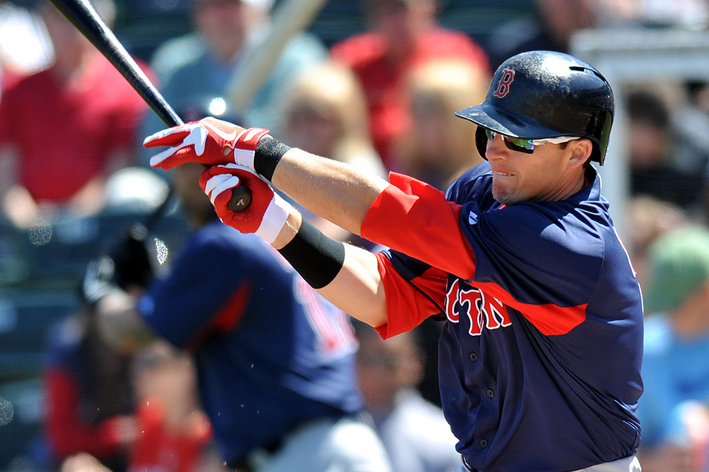 Boston's shortstop will start the season on the special 7-day concussion DL.

The deal includes an opt-out clause tied to making the club at the end of spring, so it's unclear what other choices the Red Sox have other than granting him his release or putting him on the roster, the latter of which they've already decided not to do.

Sweeney has never demonstrated much in the way of power in his seven big-league seasons, but he's always managed to hit for average and get on base at a reasonable clip. He is a career .280/.338/.378 hitter with 14 home runs in exactly 1,900 plate appearances with the White Sox, A's, and Red Sox.