The New York Yankees are in full-on crisis mode. But they're not the only team in town. The Mets are looking for answers and trying to get better everyday.

New York City is abuzz with baseball news. It's good to get baseball in the spotlight (especially with the Knicks working on a playoff run soon), but injuries and unwarranted advances from unwanted closers are not the headlines the Yankees and the Mets are looking for. Here's a rundown of all the New York news of late:

If you were thinking to yourself injuries to Alex Rodriguez, Curtis Granderson, and Phil Hughes were not enough to de-rail the Yankees, the injury gods had something special in store for you today. Mark Teixeira's strained wrist, the one that was supposed to keep him out for a couple weeks, will now cost him 8-10 weeks. The Yankees are faced with $60+ million worth of injuries projected to be sitting on the bench come Opening Day. It's hard for any team to overcome that. So what's the club going to do about it?

Now that the Yankees are in the market for a - well - for an anything, really, players who otherwise would never have crossed Brian Cashman's mind may be doing so now. Or at very least, they'll be crossing his phone. As CA Sports Management reminds us, Vladimir Guerrero can play first base: 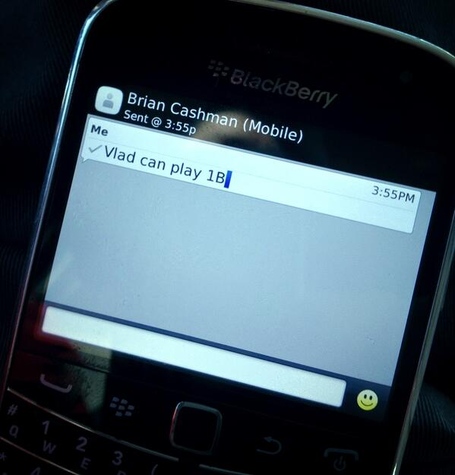 Francisco Rodriguez's stay in New York did not end well. Domestic violence charges, locker room drama, and an eventual trade is how the Mets and K-Rod said their good-byes. Now, Rodriguez wants to redeem himself. The only problem with that is, the Mets don't really want or need him.