Yankees rumors: Could Rockies' Michael Cuddyer be an option?

As the Yankees look for answers, options across the league continue to present themselves. One such option for helping restore the Yankees' roster is Michael Cuddyer in Colorado.

Share All sharing options for: Yankees rumors: Could Rockies' Michael Cuddyer be an option?

I'll start this in a similar manner that Buster Olney of ESPN started his tweets, this is speculation at this point only. The New York Yankees and the Colorado Rockies have not engaged in any talks regarding a potential trade involving Michael Cuddyer, but he is certainly an option. With Mark Teixeira's injury, the Yankees have been combing free agent lists and possible trade candidates. One place they might look is Colorado.

Here's what Olney had to say about the possibility:

SPECULATION: You wonder if there is a deal to be made for the Rockies-Yankees in which COL eats a lot of Michael Cuddyer $ to move him.

Cuddyer is a RHed hitter, which the NYY need, and has versatility to play 1B-OF-DH; wouldn't cost them any major prospects. SPECULATION

The problem, as Olney addresses, is Cuddyer's contract. The Rockies have been dumping payroll over the last year or two, so would they eat some of Cuddyer's to help ease their way fully into their youth movement? It would be a big step, but the Rockies' have been trying to cut payroll. 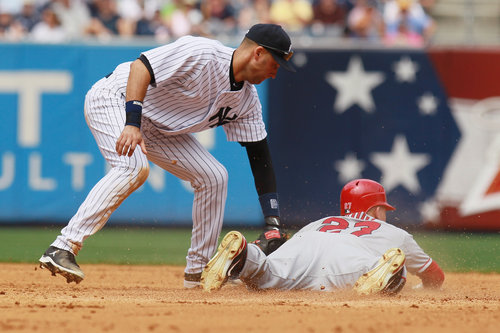 While the Yankees are trying to figure out how to replace their older, injured veterans, here's a look at how they handle the contracts of their younger players.

In the long run, taking a hit on Cuddyer may free up salary space, but in the short term, it will hurt.

Cuddyer has the versatility to play the outfield (Curtis Granderson replacement too maybe?) and both corner infield positions. He is a veteran hitter, and he could help the Yankees stay afloat while they wait for their All-Stars to return. However, they would have to give up something nice to get Colorado to eat salary and lose Cuddyer. They'd have to give up something they simply don't want to give up. And that's young talent.

They shift in the way the Yankees are building is evident lately. They are trying to rebuild their farm system, and they are far more hesitant when the prospect of trading one of their young players arises. Because of their sudden unwillingness to unload prospects in order to win now, the Yankees may not have any real trade partners when it comes to the Teixeira or Granderson injuries.

But can such a deal actually happen?