The stage, the screen, and the mound: Rangers' prospect Cody Buckel

Sometimes, you can have it all. No, it's not a tag line for a cheesy movie. Cody Buckel, a pitching prospect in the Rangers' organization, pitches professionally and can officially call himself an actor.

Share All sharing options for: The stage, the screen, and the mound: Rangers' prospect Cody Buckel

The baseball field at Royal High School, like most baseball fields in America now, is hidden toward the back of the school. Travel down Arcane Street in Simi Valley, California and you can catch a glimpse of the field with its chain-link backstop, makeshift press box, and tree-lined foul grounds. There's not much seating for spectators, but it's not a big school anyway. Residents whose homes line the west side of Pride Street can step out into their back yard, peak over their walls, and easily catch a spring game against any number of opponents. But they'll probably show most interest when Royal High takes on Simi High. The cross-town rivals may draw a few more fans to Royal High's baseball field, but it doesn't attract nearly as many people as the annual football game between the two schools. 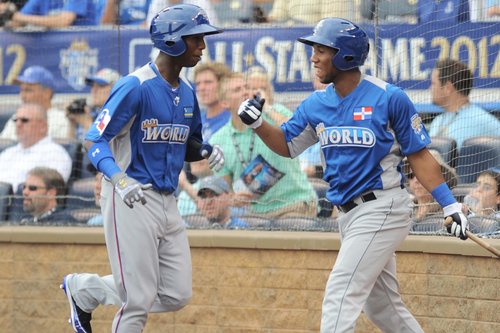 Could such a trade be a match made in heaven?

Football wins out almost everywhere in America, but don't tell that to the Royal Highlanders baseball program. They've churned out 16 professional baseball players in their history - including Texas Rangers' pitching prospect Cody Buckel.

Buckel may have made a name for himself on the school's baseball team, but classmates might have known him better as Troy Bolton from the school's adaptation of "High School Musical." After Buckel's junior high school friend, Jason Dolley, encouraged him to pursue acting, Buckel just went for it. He landed some gigs at school including the Bolton role on stage. As a side note, Dolley went on to star on Disney's "Good Luck Charlie." While Buckel and Dolley may have fallen out of touch over the years like so many of us do, his friend's prodding and inspiration led Buckel to continue his pursuit of acting. Just because he was a successful baseball pitcher didn't mean Buckel couldn't act as well. And this eventually led to his first small screen role with Dick's Sporting Goods. But we're getting ahead of the story. Let's back up.

At three years old, Buckel was already learning the game of baseball. Coming from an athletic family on his mother's side, Buckel picked the game up naturally and began playing tee-ball as a toddler. Sometimes it's just in the genes. Buckel's mother, Jane, was a softball player and a gymnast herself. Her father, David Watt, played baseball in college before a broken hand ended his dreams of playing professionally. While the talent may have been there, motivation and dedication almost never comes naturally. As Buckel grew up and started playing baseball more and more, his father, Brian Buckel, made sure to support him in any way possible. While Buckel's dad was not as athletically inclined as his mother or grandfather, Brian still pushed his son to succeed.

Inspiration and a dedication to his craft came from Buckel's father. It came in the form of an unrelenting belief that his son could succeed if he put his mind to it.

"He bought me a $300 glove and said, ‘if I'm spending this money on a glove, you better be serious about it.' And he knew I was," says Buckel about one such moment in which his father showed confidence in the skills that would eventually get Buckel drafted by the Rangers.

That magic moment came in June of 2010. The Texas Rangers selected Buckel with the 72nd overall pick (the 22nd pick in the second round). He was immediately assigned to the Arizona Rookie League where he showed promise in the limited exposure he was given. Buckel pitched five innings in the Rookie League in 2010. He started 2011 playing Low-A ball with the Hickory Crawdads of the South Atlantic League. He continued to pitch well. In 23 games, Buckel posted a 2.61 ERA that season. It earned him a bump to High-A the next season. In 2012, Buckel split time between the High-A Myrtle Beach Pelicans of the Carolina League and the Dobule-A Frisco RoughRiders of the Texas League.

For a kid right out of high school, the last 2 ½ years have been fantastic. He's gained experience, learned from veterans, and has been able to experience three different leagues worth of stadiums and cities. The ultimate goal is the Majors, but Buckel has enjoyed his time in the minors so far.

"I was spoiled in the minors with Myrtle Beach and Frisco. They have easily been my favorite places to play," says Buckel. "The Texas League has awesome stadiums and great atmospheres. I enjoyed playing all over that league."

So where does the 20-year old righty go from here? Where does a 2.48 career minor league ERA take you when you've made it through to Double-A in just over two years? Buckel isn't sure, but he knows what he has to focus on. He knows what his goals are. He wants to pitch in the Majors this year, but Buckel understands the decision ultimately rests with the Rangers.

"The Rangers want to do anything they can to win. If they think you can help the club win, you'll get your chance," he points out. "Doesn't matter age or where you were drafted. If you can be successful at the big league level, you will get your opportunity."

Buckel has help along the way. He's developed good relationships with players and managers during his time in the minors. Major League veterans like Randy Wells and younger players with big league experience have taken Buckel under their wings. That's how players are developed. That's how information is shared. Buckel is learning every day. He's learning during spring training pitching assignments, during bus rides to complexes around the Phoenix metropolitan area, and he will keep learning as he continues his minor league experience this summer.

Yet, even as Buckel gets mouth-wateringly close to the Majors, he may have another calling waiting in the wings. He enjoys acting, and his baseball connections let him explore that interest further than he may have otherwise been able to. In a recent Dick's Sporting Goods commercial, Buckel stars as the pitcher preparing to deliver a pitch to the opposing batter. It was his first commercial, but he hopes it won't be his last.

"I got involved [with the commercial] when my trainer informed me of an audition. So I went to the audition and treated it like any other day of baseball," he says. "About a week later, I was informed I had landed the role and was stoked about it."

For the relatively short spot (long in terms of commercials), the shoot took three days. Buckel was allowed to simply act normal. He's a pitcher and he was expected to pitch. He said the crew did not splice the film together. "It was one continuous shot," he said. Buckel was able to put aside any nerves he may have had with this being his first commercial and first acting in front of a camera in general. He was able to treat it like a real game. The commercial turned out great, and Buckel hopes to have more opportunities in the future.

"I enjoy baseball and acting, so when I got to do a blend of both it helped me a lot," Buckel said of the experience. "I hope to be able to do some more stuff such as commercials or film work in the offseason."

Buckel will surely get his chance as he progresses through the Rangers' system. Success in pitching can lead to success in acting. They feed off each other in terms of opportunity. Buckel's first priority is baseball, but he will gladly take acting gigs when he gets them. So the next time you see Buckel pitch - maybe it's at a Texas League game, a Triple-A game, or in a start under the bright lights for the Rangers - remember he could be showing up on a television screen near you.