Red Sox: No Plan B for David Ortiz

David Ortiz is still unable to play thanks to continued pain in his ankle, but the Red Sox are not ready to explore back-up options just yet.

Share All sharing options for: Red Sox: No Plan B for David Ortiz

The Red Sox have not yet explored possible back-up plans should David Ortiz prove unable to return from the Achilles heel injury that ended his 2012 season, writes Rob Bradford of WEEI.com. Ortiz is unsure when he will be back at this point and yesterday he had to stop his running program for more tests on his ankle.

The Red Sox are still hoping Ortiz will be ready for opening day but he has been unable to participate in exhibition games so far this spring. Manager John Farrrell told

"…we haven’t come to that date where OK, Plan B is now a legitimate one, I know those discussions will take place, but we’re still hopeful that he will be ready"

At this point, the team is not exploring outside options, Farrell added. Even if they were to seek outside help, replacing Ortiz would not be easy at this point. He was ’s best hitter last season, batting .318/.415/.611 in 383 plate appearance at age 36.

David Ortiz and his Possible Replacements 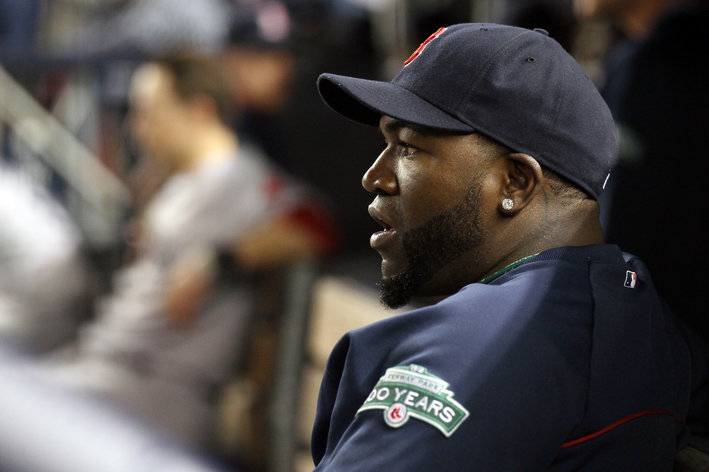 Now, it looks like there's a chance Ortiz will miss Opening Day. How do they replace him if the injury keeps him out an extended period of time?

He has been the team’s regular designated hitter since 2003 and one of the best left-handed hitters in the game for much of that time. Only four active players have a higher weighted On Base Average (wOBA) over that span and just one, Joey Votto, bats from the left side. Ortiz' .425 wOBA last season was second only to Joey Votto among players with at least 300 plate appearances.

Internally, the Red Sox have the defensively-challenge Mike Carp competing with Daniel Nava to be Jonny Gomes left-field platoon partner with Nava and for the back-up first base role. Carp is a lefty hitter with some pop but after hitting .213/.312/.341 in 189 plate appearances last year, he is not exactly going to fill Big Papi’s shoes at DH.

Nava has been the better bat recently and while he is a switch-hitter, he is better from the left-side, but his superior defense in left makes him a better fit there. From the right-side, the Red Sox have lumbering infielder Mauro Gomez and catcher Ryan Lavarnway as possible replacement options, but neither is likely to provide production close to what Ortiz would.