The Yankees may struggle to replace Mark Teixeira and Curtis Granderson during the month of April, but it won't be for lack of options.

The Yankees have two key players beginning the season on the DL, but there is no shortage of possible options for replacing Curtis Granderson and Mark Teixeira temporarily, according to Joel Sherman of the New York Post.

runs down a long list of possible fits for the Yankees, including Daric Barton of the Athletics, Brennan Boesch of the Tigers and Chad Tracy of the Nationals.

Why not pilfer other teams' NRIs? 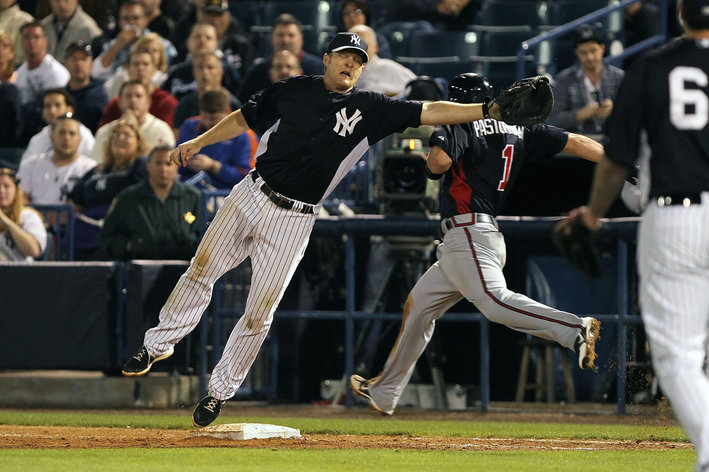 If the Yankees want to find an upgrade that won't cost them their coveted prospects they could peek their collective heads into other teams' Spring Training camp.

He also sees the Mariners matching up well with as trading partners thanks to their excess of outfielders and their strong spring training performance on offense. Outfielder Casper Wells is out of options and in danger of not making the team this spring and sees a fit there.

For his part, Yankees GM Brian Cashman is downplaying the need for a big move, pointing out that he doesn’t want to end up with a roster space issue when Teixeira and Granderson return. Given his comments, it seems likely that will look to the waiver wire or to one of the lesser deals among ’s speculations.

Few players remain on the free agent market at this point, but outfielder Scott Podsednik and first baseman Carlos Lee could be short term options for the Yankees, as both are likely to sign minor league deals. A few more players should become available as teams begin to make cuts.

may need to do something more dramatic to provide insurance for Teixeira at least. The 33 year old first baseman is expected to return mid-May, but wrist injuries are famous for sapping hitters of their power. Teixeira is also a notoriously slow starter and without regular spring training at bats, he could be a liability when he first returns.

When (or if) Alex Rodriguez returns, Kevin Youkilis, a former Gold Glove first baseman, could move across the diamond, but until then, the Yankees are facing diminished production at two key offensive positions.