Padres OF Carlos Quentin exited last night's contest against the Dodgers after he was hit by a pitch on his right wrist.

Share All sharing options for: Carlos Quentin injury: Padres OF exits after HBP

San Diego Padres outfielder Carlos Quentin exited last night's contest against the Los Angeles Dodgers after he was hit by a pitch on his right wrist. The Padres are considering him day-to-day, the team has announced.

Quentin was hit on the wrist by Ronald Belisario in the seventh inning of yesterday's contest. After moving toward first base, Quentin paused and called for San Diego's trainer. He was met on the field, and it was ultimately determined that he should leave the game. 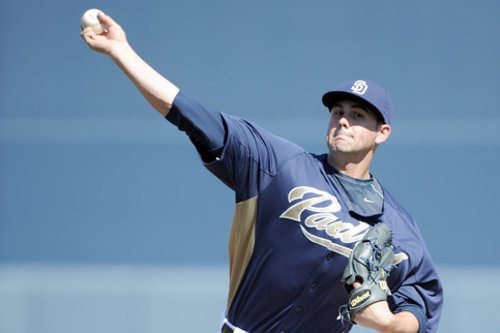 This is hardly a new experience for Quentin, both when it comes to injuries as well as being hit by pitches. The slugger has only registered north of 500 plate appearances twice over eight seasons in the majors, as he's dealt with numerous injuries during his time in the bigs.

Some of those injuries have resulted from Quentin's ridiculous propensity to be hit by pitches. He's led the majors in that category in each of the past two seasons, and he's considered the most-hit player of all time if you go by a per-plate appearance basis.