Corey Hart injury: Return pushed back for Brewers 1B

The Brewers have transferred Corey Hart to the 60-day disabled list.

Share All sharing options for: Corey Hart injury: Return pushed back for Brewers 1B

The Milwaukee Brewers have transferred first baseman Corey Hart to the 60-day disabled list as he continues to recover from surgery he underwent on his right knee, the team has announced. The transaction will push back Hart's anticipated return to late May or early June, according to Adam McCalvy of MLB.com.

The Brewers made the move in order to clear a 40-man roster spot for utility player Blake Lalli, who was promoted on Tuesday.

Hart showed solid signs of improvement early last month, as an MRI taken on his knee during the first week of March revealed sufficient healing. While the slugger initially hoped for a return well before the end of May, he will have to be out through at least the 30th of the month due to the recent transfer. 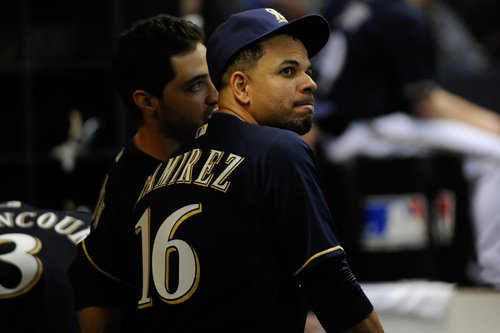 The Brew Crew has placed the 3B on the DL.

Hart continues to recover from offseason knee surgery. He underwent a procedure in late January to repair torn cartilage and address an imperfection in his knee joint. Bleeding was induced by the surgeon to promote bone healing.

The first baseman continues to work to strengthen his knee, but he's yet to work his way onto a treadmill. Hart and doctors now agree that an end of May target is more realistic, according to Assistant general manager Gordon Ash.