Chicago will go with a closer-by-committee while Fujikawa is out, which didn't work too well Sunday night...

The Chicago Cubs placed closer Kyuji Fujikawa on the 15-day disabled list over the weekend with a strained right forearm, reports Carrie Muskat of MLB.com.

More Cubs - Wrigley Renovations: What is a Video Board Worth?

The 32-year-old right-hander, who signed with the Cubs this winter after 12 seasons with the Hanshin Tigers, was recently promoted to closer in the wake of Carlos Marmol’s early-season struggles. 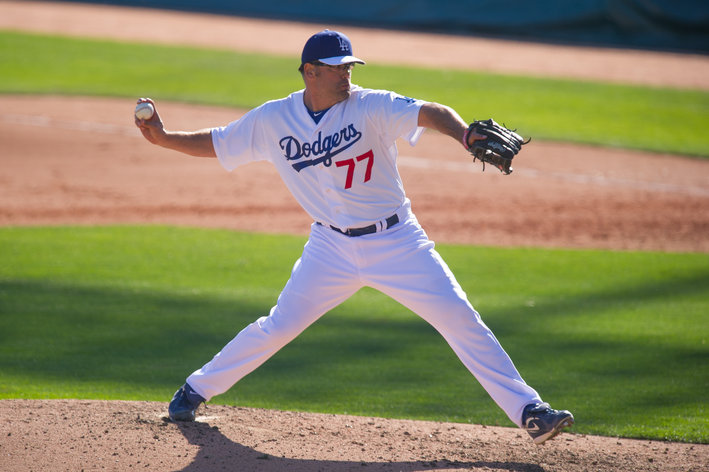 Chicago has added some bullpen depth in the wake of early relief woes.

Fujikawa’s first two save chances went well, but he was unable to hold the lead in the ninth on Friday. While the Cubs eventually came away with the win, the right-hander expressed afterwards that he had been dealing with forearm issues for a few days, admitting that the discomfort had forced him to change his arm slot on the mound.

Fujikawa explained (through an interpreter) that he has dealt with this problem in the past, and that in previous instances he was able to get back on the field in 10 days or so.

Manager Dale Sveum said that the club will not revert back to using Marmol as the closer right away, but will rather go with a closer-by-committee approach. Depending on the situation, either right-hander Shawn Camp or left-hander James Russell will close out games while Fujikawa is sidelined.

Camp got the nod on Sunday night but couldn’t close the door, giving up a two-run blast to Hunter Pence in the ninth then balking home the go-ahead run in the 10th to take the loss.