The veteran corner infielder/outfielder has decided to hang up his cleats at just 30 years old.

Share All sharing options for: Conor Jackson retires from baseball

Former Diamondbacks first baseman and first-round pick Conor Jackson has elected to retire from baseball, the Orioles' Triple-A affilate in Norfolk has announced.

Jackson, still just 30, signed on with the Baltimore Orioles on a minor-league deal in December, and had a good shot at making the Opening Day roster this spring, but didn't quite make the cut. He hit a solid .302/.327/.528 with three home runs in 53 at-bats in camp, but was sent to Triple-A when April arrived.

Norfolk manager Ron Johnson told Roch Kubatko of MASN that Jackson had been contemplating retirement for a while, ultimately coming to the conclusion that his heart just isn't in the game right now. 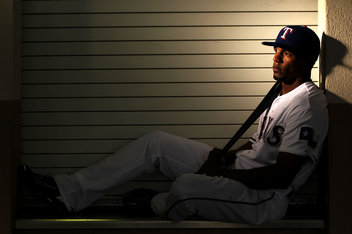 The Rangers are confident they'll be able to trade the outfielder in the next few days.

Selected by the Diamondbacks out of UC Berkley with the 19th overall pick in the 2003 Draft, Jackson rocketed through Arizona's farm system, making his big-league debut in July 2005 at age 23. Jackson took over as the D'Backs starting first baseman the following season, and put together a solid three-year stretch manning first and left field in which he hit .292/.371/.451 with 42 home runs and 86 doubles.

Then, just as the 2009 season kicked off, everything went south. Jackson contracted a strain of Valley Fever in May and complications from the illness forced him to miss the remainder of the season -- 129 games in all. Jackson came back the following year, setting up shop in left field for the D'Backs, but his numbers just weren't the same. While Jackson never produced prodigious power numbers in his early years, his power stroke vanished completely upon his return.

Dealt to the Athletics in June 2010, Jackson's struggles at the plate continued, leading Oakland to send him to the Red Sox for a minor leaguer at the end of 2011. His brief 12-game stint with the Red Sox would be his last with a big-league club, as Jackson spent all of 2012 with the White Sox's Triple-A affiliate.