The White Sox have designated LHP Charlie Leesman for assignment to make room on their roster for INF Tyler Greene.

The Chicago White Sox have designated left-hander Charlie Leesman for assignment to make room on their 40-man roster for infielder Tyler Greene, the team has announced.

The White Sox selected Leesman in the 11th round of the 2008 MLB Draft. Last season, the southpaw maintained an ERA of 2.47 with a strikeout-to-walk ratio of 1.98 over 26 starts for Chicago's Triple-A affiliate. The 26-year-old owns a career ERA of 3.37 over five seasons in the minors. 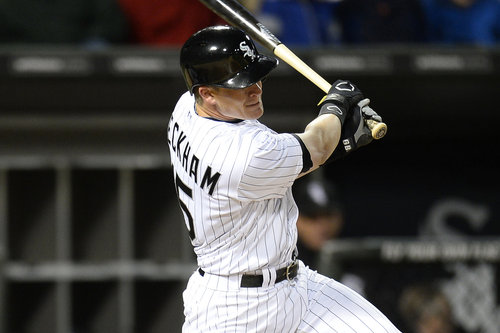 The White Sox second baseman recently hit the DL due to a wrist injury.

Greene signed a free agent contract with the White Sox on April 1 after being released by the Houston Astros near the end of spring training. The infielder hit a combined .230/.274/.400 with 15 doubles and 11 home runs over 330 plate appearances for the Astros and St. Louis Cardinals last season.

In parts of four seasons in the majors, Greene owns a career batting line of .224/.292/.356. The 29-year-old spent time at second base, third base and shortstop last season, as well as both corner outfield positions.