The Blue Jays have designated OF Casper Wells for assignment to make room on their roster RHP Ramon Ortiz.

The Toronto Blue Jays have designated outfielder Casper Wells for assignment to make room on their roster right-hander Ramon Ortiz, the team has announced.

The Blue Jays purchased the contract of Ortiz recently, and in order to fit him on their 40-man roster they designated Wells. Toronto claimed the outfielder off waivers from the Seattle Mariners last week, after he was designated by the M's at the end of spring training. 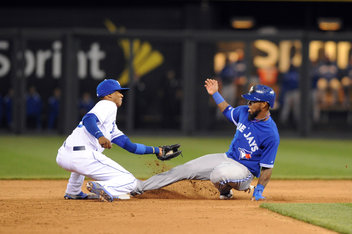 The Jays will be without their star shortstop until at least the All-Star break.

Wells appeared in 93 games with the M's last season, hitting .228/.302/.396 with 12 doubles, three triples and 10 home runs over 316 plate appearances. Seattle acquired the 28-year-old from the Detroit Tigers in the Doug Fister trade.

Ortiz signed as a free agent with the Blue Jays in December after spending the 2012 season with the New York Yankees' Triple-A affiliate. Over 27 starts in Triple-A, the 40-year-old maintained an ERA of 3.60 with a strikeout-to-walk ratio of 3.50. He's started one game for Toronto's Triple-A club this season, allowing two runs on four hits over five innings.