Seattle has lost the righty reliever indefinitely to a strain of a muscle behind his right shoulder.

The Seattle Mariners have placed right-handed reliever Stephen Pryor on the 15-day disabled list with a tear of the latissimus dorsi muscle behind his right shoulder, reports Greg Johns of MLB.com.

The 23-year-old felt discomfort in his back during a relief appearance against the Rangers on Sunday and was pulled from the game after 1⅓ innings as a result. Tests undertaken after the game revealed the muscle tear in Pryor's upper back, and now the M's bullpen is without one its key parts for the near future. 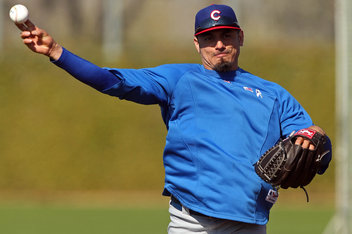 The Cubs right-hander doesn't even need to be healthy to show up on some teams' radars.

The young right-hander has been pretty close to perfect out of the 'pen for Seattle thus far this season, allowing no runs and just three hits in 7⅓ innings over seven appearances. The timetable for Pryor's return is unknown at the moment, but losing his arm for any prolonged period of time is a big hit for a bullpen that's already without Josh Kinney.

Monday was an off-day for the Mariners, so the team will not have to name Pryor's roster replacement until right before game time Tuesday evening. Lucas Luetge, Yoervis Medina, and Hector Noesi are the most likely candidates to get the call as they all have a spot on the 40-man roster, though Medina and Noesi may have the upper-hand as righties. If Pryor had gone down a few days sooner, the M's may have been able to hang onto veteran righty Kameron Loe, but they lost him on waivers to the Cubs over the weekend.