UPDATE: I guess the MRI results weren't promising. The Dodgers placed Chris Capuano on the 15-day DL with a left calf strain and have called up catcher Tim Federowicz to take his place on the roster, reports Bill Shaikin of the LA Times.

Veteran southpaw Ted Lilly will occupy the open spot in the rotation for the foreseeable future, though given his recent injury history...

ORIGINAL: Los Angeles Dodgers left-hander Chris Capuano was forced from his Tuesday start in the third inning due to a strained left calf muscle, the team has announced.

The 34-year-old southpaw, starting in place of the injured Zack Greinke, had a rough go of things even before his leg acted up. Making his inaugural start of the season, Capuano surrendered four runs on five singles and a walk in the first inning. He settled down some in the second, recording three ground ball outs, but then lasted just one batter in the third before his leg gave out on him.

Lilly to stick around 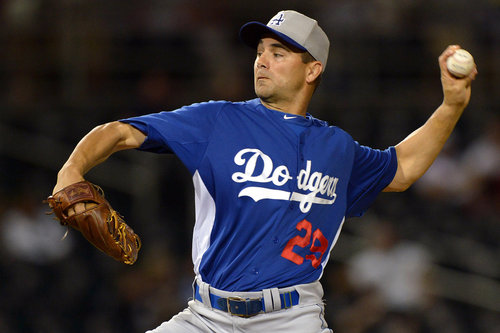 Ted is probably pretty happy now about his decision to stay with the Dodgers.

Capauno said after the game that his leg felt "a little sore" and believes that it's just a partial tear of the muscle, but MRIs taken Wednesday or Thursday will confirm or refute that claim.

LA started the season with a horde of starting pitching, carrying eight possible starters on their Opening Day roster, but now somehow the rotation is starting to look thin. The Dodgers traded an unhappy Aaron Harang away a few weeks ago, then lost Greinke last week with a fractured collarbone, and now may be without Capuano.

If it is determined to be a DL-worthy injury, then the Dodgers will likely be very grateful that Ted Lilly is still around to take the hill. Lilly almost parted ways with the club last week when he initially refused his minor-league assignment, but the veteran changed his mind at the eleventh hour.