Brown felt a "pop" in his back while diving for (and catching) a fly ball in the first inning Wednesday night, while Lannan "tweaked" his knee on the third pitch of the game.

The Philadelphia Phillies are holding their collective breath Thursday as they await test results on outfielder Domonic Brown's back and left-hander John Lannan's left knee. The pair both suffered what the team hopes are minor injuries in the first inning of Wednesday night's loss to the Cincinnati Reds.

More Phillies: Everyone Knows the Phillies are Antiquated

Brown felt a "pop" in his back while making a diving catch on a weak fly ball off the bat of Jay Bruce. He remained in the initially, but was pulled in the fourth prior to his second turn at the plate. 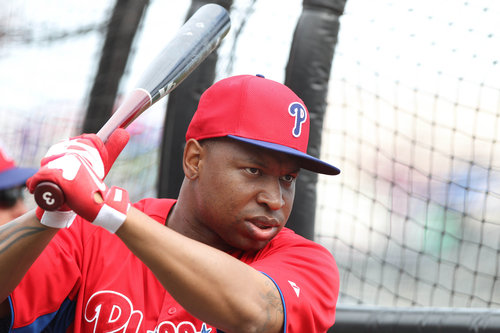 Delmon Young is expected to start his rehab assignment soon, meaning he's not far off from making his Phillies debut.

The young outfielder doesn't believe the injury is "anything major," per Todd Zolecki of MLB.com, but said that pain hit him immediately and only increased when he tried to swing a bat. He'll undergo an MRI on Thursday to make sure it isn't a serious problem.

Lannan felt a "tweak" in his knee on the third pitch of the game Wednesday, then proceeded to get knocked around for six runs on eight hits in just 1⅓ innings. The left-hander believes the knee soreness -- which he described as tendinitis --didn't allow him to push off of his back leg, resulting in his pitches being elevated in the zone.

The southpaw will also be examined by team doctors on Thursday, and it's unclear at the moment whether or not he'll have to miss a start.