Extensions are the new fad in Major League Baseball, and younger and younger players are receiving security by signing long-term contracts. Still, Washington Nationals general manager Mike Rizzo told reporters -- including Jon Heyman of CBS Sports -- that it's too soon to talk about a contract extension with outfielder Bryce Harper.

Rizzo noted that Harper has yet to register a full season in the majors. He only broke the teenager barrier in October, and he isn't slated to reach arbitration until 2016 or the free agent market until after the '18 season. 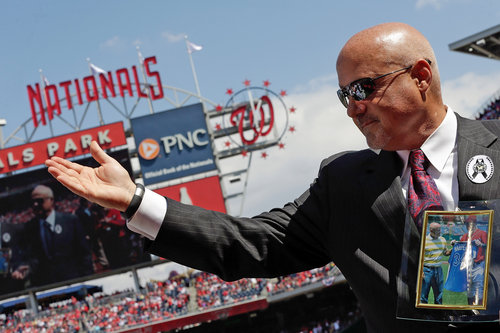 Washington is discussing a contract extension for its GM.

For this reason, Harper is likely to continue to go through minimum offers until he gets closer to arbitration. The Nationals and Harper's agent -- Scott Boras, of course -- could reach some sort of agreement to settle on an amount for arbitration years. However, Boras often recommends that his clients play out their contract and test the free agent waters.

It will certainly be interesting to see what comes of extension talks for Harper and fellow outfield phenom Mike Trout, but this still appears to be a ways off. Over parts of two seasons in the majors, Harper owns a career batting line of .279/.347/.495 with 28 doubles, nine triples and 27 home runs over 657 plate appearances.