Milwaukee has sent down the struggling Fiers to give Burgos his major-league debut this weekend.

The Milwaukee Brewers have demoted Mike Fiers to Triple-A and purchased the contract of young right-hander Hiram Burgos, reports Tom Haudricourt of the Milwaukee Journal-Sentinel. Burgos will make his major-league debut on Saturday with a start against the Chicago Cubs at Miller Park in Milwaukee.

Fiers, 27, began the year as the Brewers' fifth starter, but performed so badly in his first outing of the year -- 5 IP, 9 H, 6 ER -- that the club opted to skip his spot in the rotation the next two times through, eventually giving him a few innings out of the bullpen. Fiers didn't do well there either, so the club has opted to give him some time in Nashville to figure things out. 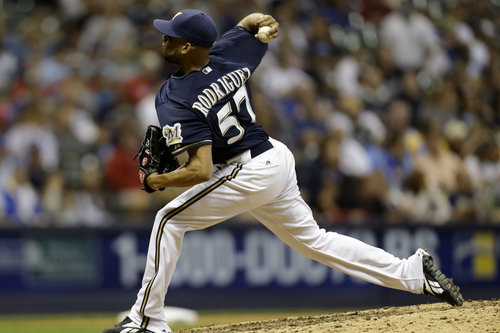 Francisco Rodriguez is back in Milwaukee on a minor-league deal.

Selected in the sixth round of the 2009 Draft, the 25-year-old Burgos made slow progress through the Brewers' minor-league system before rocketing through three levels in 2012, finishing the year with a stellar 1.95 ERA and 8.1 K/9 in 171 innings between High-A, Double-A, and Triple-A ball. Burgos got his first taste of the national (and international) stage this spring with a strong showing for Puerto Rico in the World Baseball Classic, helping lead the squad to a runner-up finish.

The right-hander was off to a good start thus far this season at Nashville, posting a 2.70 ERA and 8.1 K/9 in 16⅔ innings over three starts.