The Blue Jays' ace pitched well for the second straight start but had to leave the game after the sixth with an injury.

Share All sharing options for: R.A. Dickey injury: Knuckleballer leaves start with back and neck stiffness

As if the Toronto Blue Jays didn't have enough to worry about with their mediocre start and Jose Reyes' crippling ankle injury, R.A. Dickey left his start Thursday night after six shutout innings because of stiffness in his neck and back.

Dickey was cruising through Thursday's game when was visited by a trainer at the mound with two outs in the sixth. He stayed on to finish the inning but then got the hook. The good news for the Jays is that the club does not expect the injury to be anything serious, and mainly pulled Dickey as a precaution to avoid aggravating his neck and back. 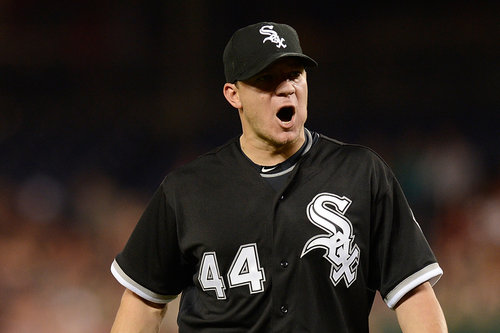 Toronto almost acquired Jake Peavy from the White Sox in October, which could have led to a very different offseason for the Jays.

Manager John Gibbons said after the game that he fully expects the veteran right-hander to make his next start, per John Lott of the National Post, but given the volatile nature of pitcher back injuries it may be a little soon to guarantee that.

The 2012 NL Cy Young winner had his best stuff working for him against the White Sox, notching seven strike outs and just two hits on the evening, and has now given up just one run in his last 12⅓ innings after getting off to a not-so-great start to the season.