Philadelphia may look to deal the left-hander if they're not in the playoff hunt come July.

The Philadelphia Phillies may look to trade left-hander Cliff Lee by the July 31 deadline if the team is not in playoff contention when the All-Star break rolls around, speculates Ken Rosenthal of FOX Sports.

Lee is no stranger to the trade rumor circuit, and has already been traded away by the Phillies once before, so it doesn't seem like much of a stretch to believe they'd do it again. The club could have sent the veteran left-hander to Los Angeles last August when the Dodgers claimed him on waivers, but opted to hang onto him. If the team is in the same situation this year, Rosenthal believes they may agree to part with him this time. 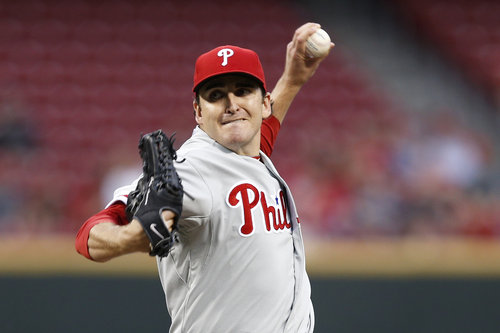 The southpaw has hit the disabled list with a knee injury.

Lee, 34, is in the third year of a five-year contract with the Phillies and is owed $25 million this season. He is owed $25 million over each of the next two seasons as well, so the return that Philadelphia will get will likely hinge on how well Lee pitches this year.

Lee is off to a solid start, posting a 2.83 ERA and 7.2 K/9 in four games, and hasn't shown any signs the last two years that entering his mid-30s has had an effect on his results. The left-hander's win-loss record was not good last year, but (surprise!) that had nothing to do with his actual performance on the mound.