The feeling among "baseball people" is that Baltimore will end up dealing the left-hander for rotation help.

Share All sharing options for: Orioles rumors: Zach Britton on the trading block?

The Baltimore Orioles are on the lookout for rotation help, and there is an "increasing feeling" that Triple-A southpaw Zach Britton is the most likely candidate to be dealt, reports Nick Cafardo of the Boston Globe.

Britton, 25, has strung together three strong starts to begin his season at Norfolk, posting a 1.98 ERA in 13⅔ innings. Much of his early success seems to be of the small sample/smoke-and-mirrors variety as his strikeout-to-walk ratio is currently sitting below one (seven walks to five strikeouts), but that doesn't mean the Orioles won't be able to move the left-hander to acquire more established rotation help. 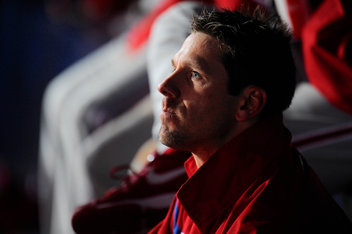 The Phillies may look to deal Cliff Lee before the trade deadline.

Rated the No. 28 prospect prior to the 2011 season, Britton's star has fallen a long way over the last two years (like the rest of the O's pitching prospects), but he's still young enough that another team could be willing to take a chance on him. Britton missed the first half of 2012 with a shoulder impingement but appears to be healthy now.

A big reason for Baltimore's need to add rotation help is the continuing struggles of Jake Arrieta. After Sunday's loss to the Dodgers, the right-hander now owns a 6.63 ERA in 19 innings. Arrieta has not gone more than five innings in any one of his four starts this year, and has walked almost as many batters as he's struck out.

While Britton is still hanging on to a glimmer of his prospect sheen, Arrieta's is long gone. The right-hander now has an established Jekyll-and-Hyde reputation on the mound, which was in full effect during his start Sunday. The Orioles could try moving the 27-year-old into the bullpen like they did with fellow former prospect Brian Matusz, but they'll probably need to find a rotation replacement first.

Jair Jurrjens is available at Triple-A if the O's can't find an external solution right away, but he still seems to be a shell of his former self since dealing with knee issues last year.