The veteran right-hander was unavailable during Sunday's 13-inning marathon against the Angels, and may have to go on the DL if he's not ready to go by Tuesday.

The Detroit Tigers were without one of their veteran bullpen arms Sunday on a night when they really could have used him. Manager Jim Leyland said that right-hander Octavio Dotel was "not available" to take the mound during Sunday's extra-inning loss to the Angels because of lingering swelling in his throwing elbow, reports Jason Beck of MLB.com.

Dotel, 39, has been dealing with the elbow inflammation for a while -- sitting out games last weekend due to the problem -- and it could very well lead to a DL stint for the veteran if he's unable to take the mound for the club's next game on Tuesday. 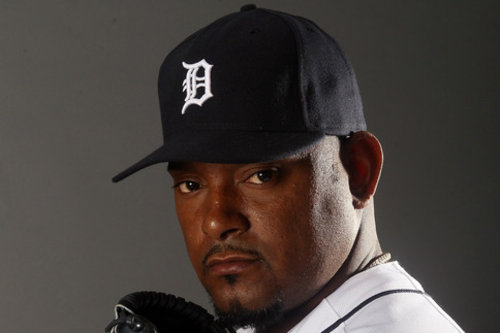 Valverde will start his new stint with the Tigers at A-ball.

The right-hander has been used sparingly over the first three weeks of the season, appearing in just six of the club's 18 games, and was clobbered for five runs on four hits in ⅔ of an inning in his last outing on Friday. Dotel's ailing elbow may also be the cause for his worrying drop in velocity, which has fallen to below 90 miles per hour on average for the first time in his career.

Up to now, the club has been working with a short-handed bullpen on the days that Dotel is unavailable, but given the 'pen's early struggles the Tigers will probably have to tap into their minor-league relievers if he's out much longer. Youngster Bruce Rondon and recent re-addition Jose Valverde are the most exciting options should Dotel go to the disabled list, but guys like Luis Marte and Luke Putkonen are also reasonable replacements.