The slugging outfielder has been cleared to take batting practice and may be back in game action by the weekend.

The Oakland A's could get some firepower back in their lineup next Sunday. Yoenis Cespedes has been cleared to take batting practice and is on track to begin a minor-league rehab assignment as early as Friday, reports Jane Lee of MLB.com.

Cespedes has been sidelined since April 12 with a strained left hand, suffered while diving into the second-base bag on a stolen-base attempt. Manager Bob Melvin said that he expects Cespedes to take batting practice while the team is in Boston over the next three days. If all goes well there, then he'll head to Sacramento for rehab games over the weekend and be back in Oakland on Sunday, the first day he's be eligible to be activated. 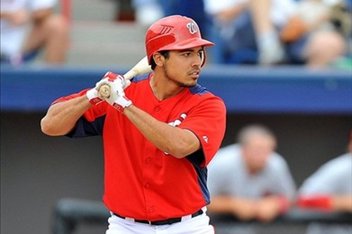 The Nats have called up their top prospect to man third while Ryan Zimmerman heals.

Cespedes, 27, wasn't off to a spectacular start at the plate -- batting .200/.298/.450 through 11 games -- but the A's have missed having his presence in the lineup. The club clobbered 19 home runs and won nine with Cespedes in left field, but have been held to just two big flies and three wins in the eight games since he went on the disabled list.

A combination of Seth Smith, Chris Young, and Michael Taylor have taken over in left in Cespedes' absence, with only Smith really pulling his weight at the dish.