Nieve's very brief time with the Tribe has come to an end as Albers returns from a family emergency.

The Cleveland Indians have designated right-handed reliever Fernando Nieve for assignment after just one day with the club to make room for the return of Matt Albers from the restricted list, the team has announced.

Nieve, 30, was called up on Sunday when starter Brett Myers went to the 15-day DL with a forearm injury, but didn't get an opportunity to take the hill for the Indians in their win over the Astros. A big-league appearance for Nieve would have been his first since July 2010, when he was part of the New York Mets' bullpen. 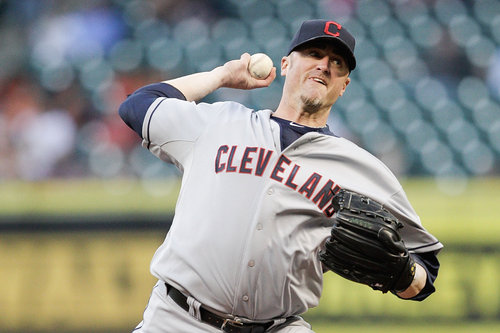 The Tribe will have to put Corey Kluber in the rotation now that Myers has gone down with a forearm injury.

Now the Nieve will have to hope for another opening in the Tribe's 'pen if/when he clears waivers next week. Nieve was stellar in his three early outings (one start) at Triple-A Columbus this year, posting a 1.38 ERA and 11.2 K/9 in 13 innings.

Albers, 30, has been on the club's restricted list since Friday so that he could stay home and deal with an undisclosed family emergency. The right-hander was placed on paternity leave and then the family medical emergency list earlier in the week, and was scheduled to return to the club over the weekend, but the Tribe decided to put him on the restricted list to give him more time at home.

Acquired from the Diamondbacks over the winter in the Choo/Bauer/Gregorius deal, Albers has allowed three runs in the very small sample of five innings for the Indians thus far. He owns a career 4.69 ERA in just under 450 big-league innings over parts of eight seasons.