After four subpar starts to begin the season, Baltimore has decided to send the right-hander back to the minors.

After three-plus seasons of perpetual inconsistency, it seems the Baltimore Orioles have finally hit their limit with right-hander Jake Arrieta. The O's have demoted the Arrieta to Triple-A Norfolk and recalled righty reliever Alex Burnett, the team has announced.

Manager Buck Showalter stressed that the move is meant only as a way to bolster the club's bullpen over the next several days, but given Arrieta's early struggles this season, it's reasonable to deduce that relief help wasn't the sole cause.

Arrieta won the fifth-starter job out of camp this season, but has not pitched well at all in his four starts this year. The right-hander pitched into the sixth on two of his outings, but never made it farther than 15 outs on any of the occasions. He has a 6.63 ERA in 19 innings on the year, and has given out a league-worst 16 free passes.

The 27-year-old has never lived up to the potential that his minor-league numbers once promised. Like fellow pitching prospects Brian Matusz and Chris Tillman, Arrieta rocketed through the O's farm system only to fail as a starter under the big-league spotlight.

Britton on the move? 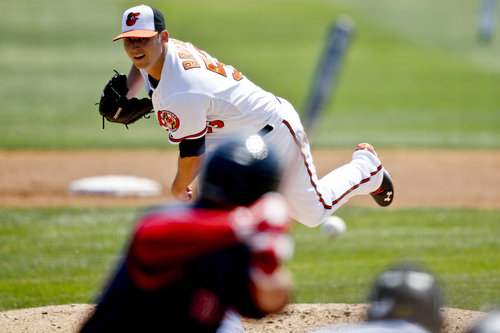 The O's may deal the young left-hander for some established rotation help.

Rated as a Top 100 prospect by Baseball America for two years running (Nos. 67 and 99), Arrieta finally got the call to the show in June 2010 after a stellar first half in Triple-A -- 1.85 ERA and 7.9 K/9 in 73 innings. Once there, the right-hander showed flashes of brilliance mixed with a total loss of command and a propensity for the long ball, a pattern he has yet to break.

The right-hander's strikeout numbers have gotten better each season in Baltimore, but the swings and misses alone have not been enough to find sustained success. Overall, Arrieta owns a career 5.40 ERA, 4.0 BB/9, and 7.0 K/9 in 353⅓ big-league innings over three seasons and change.

It's unknown who the O's plan to put in Arrieta's place in the rotation -- or who's starting the club's make-up game on Wednesday -- but they have several options at Triple-A, including Jair Jurrjens, Freddy Garcia, and Zach Britton.

Burnett, 25, was selected off of waivers from the Blue Jays (who else?) earlier this month. The right-hander spent the last three seasons in the Twins bullpen, putting up a 4.61 ERA and 5.6 K/9 in 170 innings.