UPDATE: You can stop holding your breath now. Bundy isn't scheduled to meet with Dr. Andrews about his sore arm until next Monday, reports Roch Kubatko of MASN.

In the meantime, the young right-hander will be re-examined by the O's team doctor.

ORIGINAL: Hold your breath, O's fans. Top pitching prospect Dylan Bundy was supposed to get back on a throwing program this week but instead booked a visit with elbow specialist Dr. James Andrews to get a second opinion on his still aching arm, reports Roch Kubatko of MASN.

Bundy, 20, hasn't thrown off a mound since mid-March, when his forearm and elbow woes first cropped up. The right-hander threw from 90 feet on flat ground Monday, but indicated that he still felt some discomfort in his forearm, so opted to visit Dr. Andrews in Florida on Tuesday. 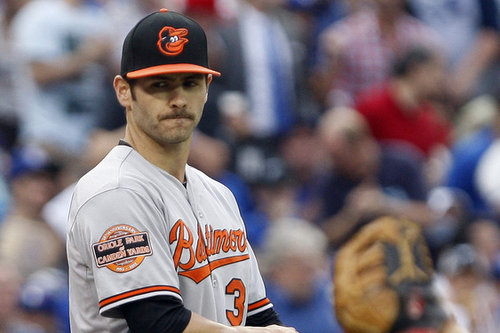 Baltimore has sent Arrieta back to Triple-A to work on re-establishing his command.

MRIs taken on Bundy's arm have come back clean thus far, but it's likely he'll get another while in the Sunshine State. For the moment, the injury is being described as tightness in his "flexor mass," which is a group of muscles and tendons that runs between the forearm and elbow.

Currently rated the No. 2 prospect in the game by Baseball America, Bundy was on track to join the Orioles' rotation sometime this season, but it looks as though that will be put on hold for a while. Visits to Dr. Andrews don't always lead to diagnoses of Tommy John surgery or other invasive procedures, but the best-case scenario is still probably a few months on the sidelines.

Bundy rocketed through the O's farm system last season -- his first year of pro ball -- eventually breaking through for a very brief stint with the big-league club in late September. The right-hander finished the year with a 2.08 ERA, 10.3 K/9, and 2.4 BB/9 in 103⅔ innings overall between A-ball and Double-A.