Houston lost their center fielder indefinitely on what turned out to be a game-winning hit-by-pitch Tuesday night.

At the plate with the bases loaded in the third Tuesday night, the 29-year-old Maxwell took a 91 mile-per-hour fastball from Hisashi Iwakuma off of his left hand, earning himself the go-ahead RBI but suffering a break of his fifth metacarpal in the process. Maxwell acknowledged the bittersweet irony of the event after the game:

"It’s definitely – a play on words – a bad break. But we definitely got the team the win and I’m thankful for that," said Maxwell, who’ll see a hand specialist Wednesday for further evaluation. 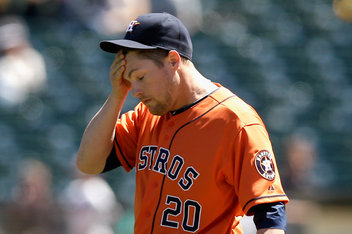 Maxwell wasn't off to the best start at the plate, hitting just .234/.289/.390 through his first 83 plate appearances, but manager Bo Porter stated that his outfield defense will be sorely missed. Brandon Barnes, who filled in for Maxwell last night after the injury, will likely take on a bulk of the starts in center for the next few weeks.

Grossman, 23, is getting his first taste of big-league action. Acquired as part of last year's Wandy Rodriguez deal, the switch-hitting outfielder batted .266/.376/.410 in 131 Double-A games last year, and was hitting well in his first go at Triple-A this season, notching 22 hits and 16 walks in 84 plate appearances. Grossman has gotten most of his pro playing time in center but also has significant experience at the corners, so he can fit in wherever Houston needs him.