In need of a spot starter for Wednesday's game, Baltimore decided to swap one recent waiver claim for another.

The Baltimore Orioles have optioned right-hander Alex Burnett back to Triple-A just two days after promoting him in order to make room on the roster for spot starter Josh Stinson, reports Roch Kubatko of MASN.

Stinson, 25, will make his second big-league start Wednesday afternoon for the O's, filling the gap created by Saturday's double-header so that Jason Hammel can start on regular rest on Thursday in Oakland. 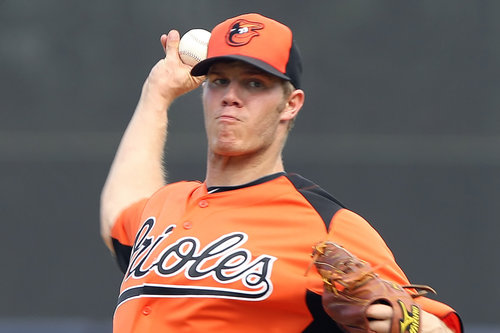 Top prospect Dylan Bundy visited with Dr. James Andrews Tuesday for a second opinion on his sore elbow/forearm. All of Baltimore awaits the results with bated breath.

Claimed by Baltimore in early April, Stinson has just 22⅓ MLB innings to his name, all coming in the last two seasons. A late-round pick by the Mets in the 2006 Draft, the right-hander has never blown hitters away but has still managed to climb his way up the minor-league ladder, and owns a 0.77 ERA over 11⅔ innings in two starts at Triple-A this year.

Left-hander Zach Britton was also available to start Wednesday afternoon's game, but the O's have decided to go with Stinson instead. It's been rumored that Baltimore has been thinking about moving Britton, so the club could have decided to keep him in Triple-A to avoid the risk of hurting his trade value with a bad MLB start. That's just my baseless speculation, however.

Burnett, also an April waiver claim, was called up on Monday upon Jake Arrieta's demotion to the minors. He was expected to help the bullpen through the meat of their current stretch of 17 games in 16 days, but lasted only 48 hours in Baltimore and didn't make it into either game he was present for.