Detroit bumped the southpaw off the 40-man roster Wednesday to make room for Jose Valverde.

Share All sharing options for: Tigers DFA Duane Below

The Detroit Tigers designated left-hander Duane Below for assignment before their game on Wednesday to make room on the 40-man roster for new/old closer Jose Valverde, reports Jason Beck of MLB.com. The Tigers now have 10 days to trade, release, or re-assign Below.

More Tigers: It's Almost As Though Valverde Never Left

The 27-year-old spent most of the 2012 season at part of Detroit's relief corps, posting a 3.88 ERA and 5.6 K/9 in 46⅓ innings, but didn't crack the Tigers' roster out of camp this year and had been pitching at Triple-A Toledo. 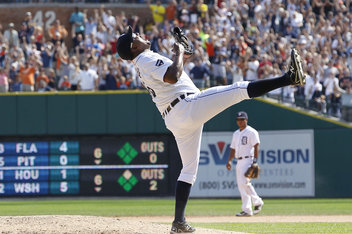 Papa's got a brand new bag, and it looks an awful lot like his last one.

He has worked almost exclusively as a starter in his minor-league career -- including four strong starts for the Mud Hens this season -- but was mostly relegated to Detroit's 'pen in his two seasons with the big-league club. In 75⅓ innings overall with the Tigers, Below amassed a 4.06 ERA, 2.3 BB/9, and 5.1 K/9.

The southpaw hasn't put up big strikeout numbers in the high minors (or the majors), but his excellent control should lead to someone throwing in a waiver claim if he ends up on the wire. If nothing else, he could serve as an excellent LOOGY for a team in need of a bullpen arm.

So far this season, Below owns a 2.10 ERA in 25⅔ innings over four starts.