The right-hander passed his final rehab test with flying colors, and rejoined the club in New York on Wednesday.

New York Mets right-hander Shaun Marcum will finally make his first start of 2013 on Saturday after spending much of spring and the first four weeks of the year on the sidelines, reports Matt Ehalt of ESPN.com.

Marcum, 31, cleared the final hurdle in his rehab from neck and shoulder issues by throwing five scoreless innings in an extended Spring Training game on Monday, and officially rejoined the team in New York on Wednesday before their extra-innings win over the Dodgers. 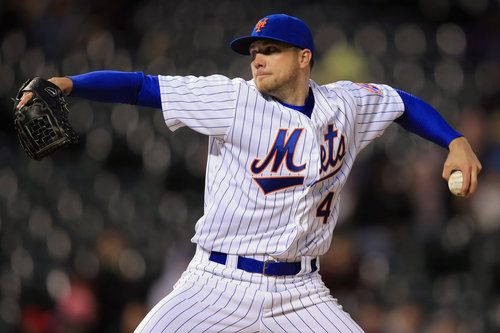 Southpaw Aaron Laffey has been claimed by the Blue Jays. Though, let's be honest, he probably won't be there long.

The right-hander will make his Mets debut opposite rookie Jonathan Pettibone and the Philadelphia Phillies at Citi Field Saturday afternoon, and will be limited to 90-95 pitches on the day. Marcum will be a welcome sight for a pitching staff that has struggled in games not started by guys whose names end with -arvey or -iese.

Marcum went down during camp with an inflamed nerve in his neck. The nerve caused pain in both his neck and shoulder, eventually requiring a cortisone shot to settle it down. Teams doctors believe that Marcum may need another shot sometime later this year, but because the swelling has gone down the next one shouldn't require him to miss any time.

Marcum has yet to be activated from the disabled list, and probably won't be until after Friday's game so the club can continue to carry eight relievers for as long as possible.