Cleveland removed their backup catcher from the DL before Wednesday's game and put him in the lineup.

Marson had been dealing with a neck injury stemming from a collision at home plate a couple weeks back, and needed only the minimum 15 days to get back into the lineup. The 26-year-old backstop went 0-for-3 in his return to Cleveland on Wednesday and is still looking for his first hit of the season.

Bourn in stitches no longer 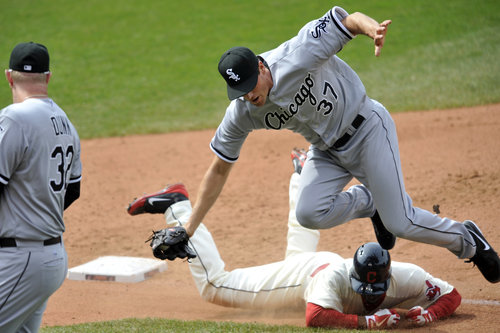 The Indians outfielder is having the stitches removed from his finger Thursday. He's still out another week or so.

Marson has served as the Tribe's primary reserve catcher for the last three seasons now, and has hit .216/.304/.290 with just four home runs in 801 plate appearances. Given the prodigious power and production of starting catcher Carlos Santana, the Indians can get away with a glove-first guy like Marson, who has thrown out 31 percent of would-be base-stealers in his career.

Gomes, 25, didn't really hit for average or get on base much in his six-game stint with the Tribe, but when he did make contact he made sure it went a long way. The righty slugger had just four hits (and no walks) in his 19 plate appearances, but three of them went for extra bases: two homers and a triple.

Acquired from the Blue Jays over the winter, Gomes will likely spend much of the year in Columbus but could get a call again later in the year if one of the Santana/Marson duo or a corner infielder goes down.