Remember those rather specious links tying Robinson Cano to Biogenesis from the other day? Well, turns out they're a whole lot of nothing. Surprise! (Not a surprise.)

Biogenesis Scandal: Get Caught Up on The Whole Story

Major League Baseball has looked into the alleged connection between the Yankees' second baseman and the Florida PED clinic -- an associate of Cano's appeared on a client list -- but have found no proof that he ever used the clinic and have determined that his ties are "either nonexistent or immaterial," reports Jon Heyman of CBS Sports. 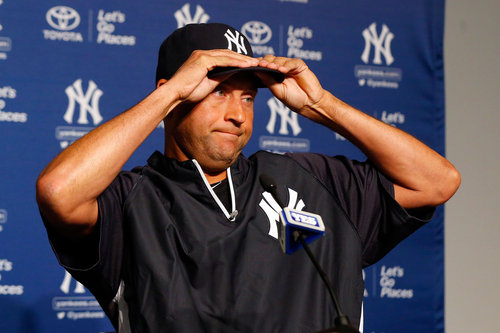 "Hi, everybody. My name's Derek Jeter and I'd like to take an hour out of your busy day to give you no new information."

Heyman adds that investigators in no way view Cano as "a significant figure" in their hunt for Biogenesis answers, and very likely has nothing at all to worry about.

Cano's name has never appeared on any Biogenesis documents, but the All-Star found himself pulled into the controversy earlier this week when it was revealed by ESPN that a spokeswoman for his foundation was named on one of the clinic's client lists next to a bill for $300. His associate maintained that the only reason her name appeared in Biogenesis' records was for an independent weight-loss consultation over the summer.

MLB's investigation into Biogenesis is ongoing, and is targeting several other prominent players, including Ryan Braun, Alex Rodriguez, Nelson Cruz, Melky Cabrera, and Gio Gonzalez. The only player to receive punishment for his ties to the clinic thus far is minor leaguer Cesar Carrillo, who received a 50-game suspension.