The Colorado Rockies got a scare last night when star shortstop Troy Tulowitzki was forced to leave the game with a shoulder injury. Tulo hurt himself on an awkward slide at home plate in the top of the first, and was removed in the third when his spot in the lineup came around again.

Limited to just 47 games last year because of groin injury complications, the Rockies likely held their collective breath as their $100MM+ infielder was checked on by doctors. The Rockies announced later in the game that the injury was a mild left shoulder strain and have listed Tulowitzki as day-to-day. 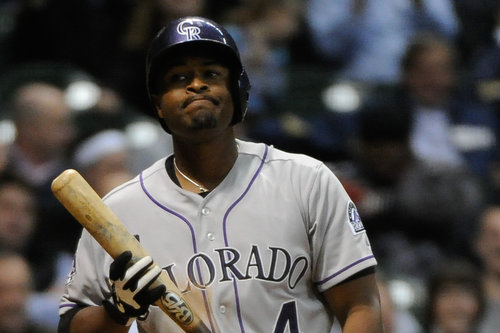 Tulo himself expressed relief following the game that his strain is "not serious," though it's unclear whether he'll just right back into the lineup on Monday, reports Troy Renck of MLB.com. The 28-year-old shortstop has been a big contributor to Colorado's surprising hot start, hitting .308/.394/.603 with six home runs through the club's first 25 games. Though they've lost two straight, the Rockies are still atop the NL West with a 15-10 record.

Jonathan Herrera filled in at short when Tulowitzki left the game on Sunday and will probably be called on to play there on Monday as well if Tulo isn't cleared to return to the lineup.