LA and Kershaw's reps were in discussions late last week, but it's unclear whether they're still ongoing now that the season has begun.

A day after Clayton Kershaw single-handedly destroyed the San Francisco Giants on Opening Day -- throwing a four-hit shutout and topping it off with a game-winning home run -- you'd think the Dodgers would step up their contract talks with the southpaw. The young left-hander's agent was at Dodger Stadium on Tuesday, but a new deal between LA and Kershaw doesn't "appear imminent," reports Dylan Hernandez of the Los Angeles Times.

Rumors of a monster contract extension for Kershaw were bandied about all winter and spring, and talk of a record deal only escalated after Justin Verlander agreed to his long-term extension last week. The Dodgers and Kershaw's representatives -- who also represent Zack Grienke -- quietly began extension talks last Friday, but it is unclear whether or not the discussions are ongoing. 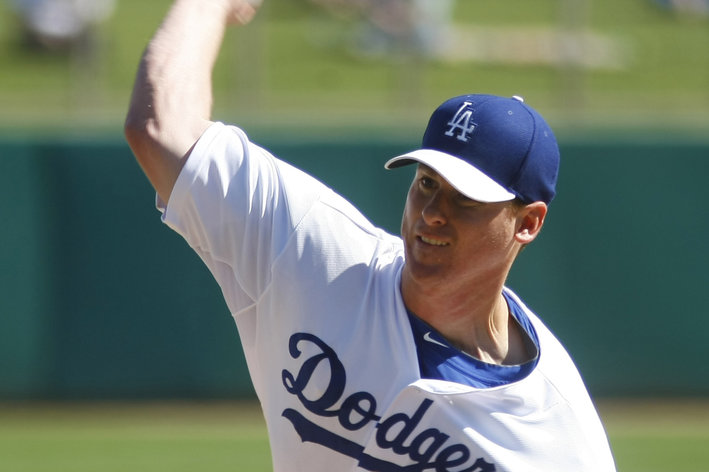 The Dodgers' right-hander is scheduled to be activated from the DL next Wednesday.

Kershaw said during Spring Training that he did not want contract discussions to continue into the regular season, per Hernandez, but it's unknown whether he's changed his mind in light of Verlander netting record money. Given Kershaw's age and resumé-- not to mention the Dodgers' deep pockets -- if the two sides do come to an agreement it seems likely to top both Verlander and Felix Hernandez's new contracts.

The 25-year-old is in the second year of a two-year, $19 million deal with the Dodgers. He is headed for his final year of arbitration in the fall, and will become a free agent following the 2014 season if LA cannot lock him up before then.