Jim Callis has the breakdown of the money allotted to each team through the first 10 rounds of the upcoming amateur draft.

Major League Baseball is now entering the second season of the new Collective Bargaining Agreement, which means that for the second time teams will be allotted draft spending money based upon when they are selecting in the first 10 rounds, how many players they have to draft, and the assigned slot value of each pick.

The total dollar amount assigned to the draft picks in the first 10 rounds -- $202,501,600 -- has increased by 8.2 percent from last year despite there being 22 fewer picks overall, reports Jim Callis of Baseball America.

The Houston Astros lay claim to the largest pool of money for the second year running, are one of just three teams who have been allotted more than $10 million for the July draft, along with the Chicago Cubs and Colorado Rockies. On the other end of the spectrum, the Angels and Nationals have both been allotted just under $3 million each.

Here are the bonus pools for the top 10 clubs, along with their number of picks in the first 10 rounds: 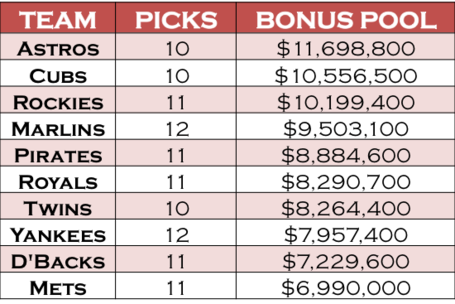 Teams are handed varied penalties for overshooting their allotted pool money based on how far over the limit they go. If a club exceeds its bonus pool by 0 to 5 percent, for instance, it will have to pay a tax of 75 percent on the excess money. Penalties get significantly more harsh from there, as exceeding the pool by more than 5 percent results in the loss of a first-round pick the following year.

To view the rest of the bonus pool numbers, check out Callis' full article here.