Chicago could be the well-traveled outfielder's final stop.

The Chicago White Sox have acquired outfielder Casper Wells from the Oakland Athletics for cash considerations, the team has announced.

More ChiSox: It's the Offense

The ChiSox are the the fourth team to have Wells on their active roster this month. The 28-year-old began the year with the Seattle Mariners but lost the final Opening Day outfield spot to Jason Bay, forcing the M's to designate him for assignment. The Toronto Blue Jays claimed him first (as they do), but quickly DFA-ed him and sold him to the A's for $100k.

Wells finally got some playing time during his week in Oakland, starting one game and netting five hitless plate appearances in all. Once Yoenis Cespedes was ready to come off the disabled list on Sunday, however, Wells found himself out of a job and DFA-ed yet again. 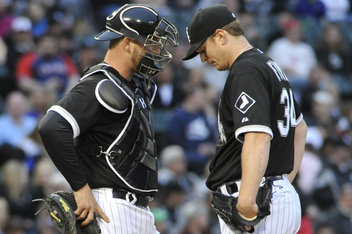 Whether or not Wells will stay with Chicago long-term depends on what they plan to do with him when Dayan Viciedo returns from his oblique strain. Without Viciedo on the roster, the ChiSox have just one right-handed outfield bat, so Wells may just be a temporary fix to give the club another righty-hitting option.

A career .244/.314/.431 hitter with 25 home runs in 661 big-league plate appearances, Wells brings a solid bat and an great glove to Chicago, as well as the ability to play all three outfield positions. He is a much better hitter against southpaws in his career, so expect Wells to take a few starts in left over Jordan Danks this week when a lefty is on the hill.

In order to make room on the roster for Wells, the Sox have transferred left-hander Leyson Septimo to the 60-day DL.