The O's top prospect got a platelet-rich plasma injection in his sore forearm Monday and will now rest his arm for six weeks in the hopes that the discomfort will disappear.

The Baltimore Orioles didn't get bad news from right-hander Dylan Bundy's visit to elbow specialist Dr. James Andrews on Monday, but they'll have to wait several weeks before they'll really know if their top prospect is out of the woods or not.

Bundy received a platelet-rich plasma (PRP) injection in his right arm and was prescribed six weeks of rest, after which time he will be re-evaluated, reports Britt Ghiroli of MLB.com. 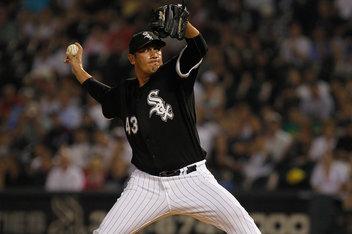 Freddy Garcia will not opt out of his minor-league deal with the O's. He'll keep pitching at Triple-A for now.

The Orioles remain optimistic about Bundy's recovery. Numerous MRIs have revealed no structural damage in his elbow, and the discomfort is thought to be located primarily in his forearm. The PRP injection was performed in the flexor mass area of his right arm, which is the bundle of muscles and tendons between the forearm and elbow.

"putting the patient’s blood through a special centrifuge to isolate platelets and growth factors, which are then injected back into the injured area to help spur healing."

Ghiroli adds that their are not any side effects to the procedure, which is not quite true. All treatments carry some risk. Case in point: Former Blue Jays right-hander Jesse Litsch suffered an infection from PRP treatment on his shoulder early last year and hasn't pitched in the big leagues since.

Bundy will remain in Sarasota, Florida, while he rests his arm and hopes that the PRP will do its thing.