The veteran has missed eight of the club's last nine with a balky back, and will now miss several more.

UPDATE: Farewell, modal auxiliary verbs. The Yankees have officially placed Kevin Youkilis on the 15-day DL with a lumbar spine sprain, the team has announced.

Young infielder Corban Joseph has been promoted from Triple-A to take Youk's roster spot. The 24-year-old is not in Tuesday's starting lineup but should make his Major League debut sometime this week. A second baseman by trade, Joseph also has some playing experience (though not much) at the infield corners.

ORIGINAL: Kevin Youkilis may be running out of time to prove that his back tightness isn't a DL-worthy injury. The Yankees' corner infielder was on the sidelines for the eighth time in nine games on Monday, and might have a stint on the disabled list in his near future, reports the Associated Press.

MRI results on Youk's sore back showed no signs of structural damage, but he will receive an epidural sometime Tuesday in an attempt to alleviate the discomfort.

Youkilis returned to the Yankees' lineup on Saturday after sitting for six straight games, and managed to play the entire contest, but woke up Sunday with renewed pain in his back. Had Youk not returned to the lineup over the weekend, New York could have dated his DL stint all the way back to April 20, but now a trip to the disabled list will cost the club at least an extra week.

Matsui to retire a Yankee 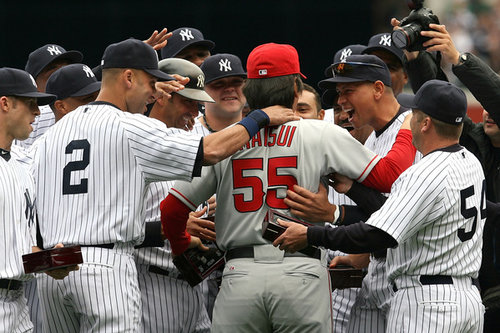 New York is planning to sign the veteran to a one-day contract so he can officially a retire as a member of the Yankees.

Jayson Nix has filled in at third in Youkilis' absence, but has not fared well at the dish in the nine-game span, notching just eight singles to go along with seven strikeouts.

Should Youkilis end up on the DL, New York doesn't really have many roster options to replace him. With Jeter, A-Rod, and Teixeira all on the disabled list for the foreseeable future, second-base prospect Corban Joseph is the only infielder left on the 40-man roster who isn't already with the big-league club. Joseph has just 43 games of pro experience at third base in six minor-league seasons, and none since 2010.